Macross 30: The Voice that Connects the Galaxy
Macross Δ Scramble

Aisha Blanchette (アイシャ・ブランシェット, Aisha Blanchette) is the one of the main heroines in the Macross 30: The Voice that Connects the Galaxy video game. She is the head of the Strategic Military Services (S.M.S.) Ouroboros Branch.

Though spunky and a little bratty because of her youth, Aisha is serious about her position and the responsibilities it entails.

Aisha fancies herself as a "Beautiful Genius", but this display of conceit is just her way of playing around. While she is indeed talented, she backs it up with (almost) consistent effort.

She also loves researching about the working history of variable fighters, Destroids and Zentradi battle gear as well as the Protoculture ruins in Ouroboros. Her obsession with all these borders on fanaticism, and she can talk for hours about them.

Aisha can indeed be described as a "Beautiful Genius". With the right blueprints and raw materials, she can build any kind of fully-functioning variable fighter, Destroid or Zentradi Battle Armor replica. She also has enough experience with flying to give them a test run.

Her flight and combat experience is limited at best, but sufficient enough to deal with Bandits, especially her unwanted and persistent suitor, Guinness Mordler.

The FAST pack replicas she creates are durable, lightweight and can be used in the atmosphere as well as space unlike most of their actual counterparts.

Aisha's skill as an engineer is known in quite a few places, so she sometimes gets called on as a consultant or guest researcher. She also happens to pilot a pink VF-19E Excalibur which she built herself and tuned to her personal specifications.

The creation of YF-30 Chronos will serve as the culmination of the practical skills and know-how she has gathered over time.

Leon Sakaki
Her new subordinate. Aisha loves playing the authority figure and works Leon to the bone, but that's only to hide her true feelings from him.

Mina Forte
Another new subordinate, but Aisha also treats her like a little sister. They will inevitably become rivals for Leon's affection.

Mei Leeron
The Hunter Guild and S.M.S. Ouroboros Branch have a decent working relationship, but their respective heads are often fighting, with Aisha always calling Leeron an "old hag".

Guinness Mordler
Aisha is totally annoyed by this bandit's persistent advances and often brings out the big guns when he's around.

Aisha at the Gefion's bridge.

Aisha starting with another one of her enthusiastic engineering rants.

Aisha on the bridge of the Gefion. 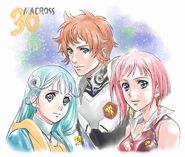 A sketch of Aisha, Mina Forte and Leon Sakaki by Hirotaka Marufuji.

Aisha's VF-19E Excalibur on a card.
Add a photo to this gallery

Retrieved from "https://macross.fandom.com/wiki/Aisha_Blanchette?oldid=42475"
Community content is available under CC-BY-SA unless otherwise noted.