Berger Stone (ベルガー・ストーン, Berugā Sutōn) is a character in Macross Δ. He is the head of the Brisingr Globular Cluster branch of the Epsilon Foundation, and specializes in delivering exposition dumps throughout the series.

Berger fancies himself an "independent contractor", owing allegiance to no one. He maintains close contact with the Kingdom of the Wind and Chancellor Roid Brehm, researching relics of the Protoculture ruins on Windermere. At the same time, he works with Chaos, stating that the Kingdom of Wind is simply one of his clients.[1]

As a businessman, he puts profit first and will not hesitate to drop clients if they go against the interests of the Foundation.

Berger enjoys sharing exposition regarding humanity and its history with the Protoculture. One of his pet theories is that songs have been used as a weapon throughout history, and he speculated that Mikumo Guynemer was developed by Lady M to harness the power of Song Energy. He also theorized that the Vár Syndrome is the result of fold bacteria finding new humanoids hosts after the Vajra fled to another dimension. However, some have doubted his claims, particularly one where he is said to have seen the original SDF-2 Megaroad-01.

Berger Stone was initially involved with Kingdom of the Wind, commissioned to conduct clandestine research on the Sigur Valens and the Protoculture ruins on Windermere. Berger not only helped make the Sigur Valens functional, he also provided plans for Windermere's mainstay fighter, the Sv-262 Draken III,[2], which contained a fold-quartz powered ISC or "Inertia Store Converter". The Draken also included a special "Reheat" system, a cheaper version of the "Fold Wave system" found on the YF-29 Durandal that increases engine boost system output powerful enough to break through the Fold Fault barriers surrounding Windermere IV. This gave the Drakens an advantage over the VF-31A Kairos, with only the YF-30 Chronos and VF-31 Siegfried being close enough to match its capabilities. The Siegfried however does not have a "Reheat system", thus making it unable to enter through Fold Fault barriers.

Following Chaos' failed assault on Windermere IV, Berger decides to sever his ties with the Kingdom of the Wind and provides valuable information to Chaos' members and even helps sneak Arad Mölders, Kaname Buccaneer, Makina Nakajima, and Reina Prowler to Wright Immelman's operational VF-22 Sturmvogel II in the Windermerian castle in order for them to rescue their friends from execution by King Heinz Nehrich Windermere. He does this under the assumption that it would be profitable for the Epsilon Foundation if the N.U.N.S. wins the war. 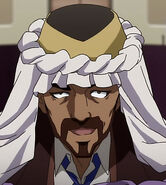