Chaos Operator (ケイオス オペレーター, Chaos Operator) is an original character from the Macross Δ Scramble video game. She is one of the many operators under the employ of Chaos.

She usually displays a no-nonsense attitude and sticks to mission status reports, but when things ease up she shows her caring side to the pilots she works with.[1].

As an operator for the CIC, she can quickly provide critical mission status info of everything from enemy presence, ally damage status, among others. Her timing is not always perfect, but she does her best to fulfill her role.

An unnamed Chaos operator tasked with providing CIC backup to Hans Schwalm and Fan Vernalotte. Should the need arise, she can also assist Delta Flight as well as other pilots of the Macross series. 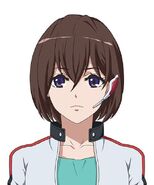 First mission Briefing for Chaos Side, as shown by the Chaos Operator.
Add a photo to this gallery

Retrieved from "https://macross.fandom.com/wiki/Chaos_Operator?oldid=37239"
Community content is available under CC-BY-SA unless otherwise noted.