Start a Wiki
Chie Kajiura (チエ・カジウラ, Kajiura Chie) is a Japanese singer. She debuted in 1995 under Speedstar Records, a division of Victor Entertainment.[1] She performed the singing voice of Mylene Flare Jenius for Fire Bomber in the Macross 7 television series and its subsequent spinoffs.

Her daughter is the award winning Hana Sugisaki (formerly known on-stage as Hana Kajiura), an actress under Stardust Promotions.[2]

While Chie was making demos for her professional debut, she was chosen to be the singing voice of Mylene Flare Jenius (sharing the role with Tomo Sakurai) for the fictional band Fire Bomber that appeared in the Macross 7. Her first Macross-related single, "Dakedo Baby!!" was released July 24, 1995, well ahead of her first original album Loophole in September 21, 1995.

At the time, she wrote lyrics under the name "M-MEG". Her single "Dakedo Baby!!" was a hit on the Oricon music charts, debuting at 15th place. Unfortunately, she was unhappy with her image at the song's music video, and decided to wear her signature black look ever since. After releasing the singles "Koi wa Okita" "*** Reaching high 高 く ***" and "To This Forest ←", along with her debut album "LOOPHOLE", "CONFUSION", and the PV collection "INSIDE MY BRAIN", she took a hiatus after disagreements with the direction of her musical image. She returned in 2004, and has been performing live in small gigs ever since.

She is also a candle maker, and sells her candles at events and or online.[3]

Ever since taking the role of Mylene Flare Jenius and coming out of a brief career break, Chie has celebrated the character's birthday of February 2nd by holding a small live concert gig called "Mylene Night". She had planned the event as early as 2010, and after acquiring all the necessary approvals from Big West, and getting Mylene's voice actress Tomo Sakurai, as well as Haruhiko Mikimoto and Hidetaka Tenjin on board, she held her first Mylene Night events in 2011, both of which took place in Osaka and Tokyo.[4]

The official name of the event is "W Mylene Night", where 'W’ is pronounced ‘daburu’ and is often used as a substitute for the word ‘double’. The pun behind the name ‘W Mylene Night’ was that we were going to get double Mylenes in that both Chie and Tomo would be performing.[5]

The Tokyo performance was to be held at Morph Tokyo, and would be a regular concert, while the Osaka one would be a dinner show with Macross-themed food. The food items were decorated with a message and a Gubaba drawing. The Tokyo concert began with the songs "Dakedo Baby" and "My Friends" played on a large projector screen with their accompanying animation from Macross 7. Then, a pink Valkyrie drawn just for the event by Hidetaka Tenjin scrolled down the screen. Chie’s name was written on one wing, Tomo’s on the other. As the concert wore on, Tomo’s cheeriness worked well with Chie’s more somber tone.

A total if 19 songs were performed, with several classics by Lynn Minmay thrown in to the delight of the audience. Issues concerning the event was that the venue was ridiculously small and tickets had sold out months in advance. Subsequent Mylene Nights would have different themes, guests and song lists. 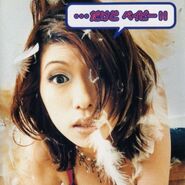 Chie Kajiura ...だけど ベイビー！！ PV
Chie's debut single for Macross 7, "…Dakedo Baby!!" MV. The look of the video is something she's distanced herself from ever since.

Retrieved from "https://macross.fandom.com/wiki/Chie_Kajiura?oldid=39271"
Community content is available under CC-BY-SA unless otherwise noted.