Docker (ドッカー, Dokka-) is a variable fighter pilot in the Macross 7 television series. He was the third member of Diamond Force, but immediately got replaced by Physica S. Fulcrum after his Spiritia was drained in his first sortie, leaving him incapacitated for a long time. Upon recovering, he becomes a test pilot for the VF-19 Excalibur and later the leader of the newly-formed Emerald Force.

Though only established later on due to being in a vegetative state after his first launch, Docker is an easygoing and fun-loving character, making it a point to tease the tightly-wound Gamlin every chance he gets.

Docker also has a tendency of going overboard with everything, be it piloting or girls. He has the misguided philosophy that if girls give him an indirect answer when asking them out on a date, it automatically means a "yes".

He shows interest in Mylene Flare Jenius whom he describes as "cute and lovely", but despite his persistent advances, she doesn't even give him the time of day.

As a member of Diamond Force, Docker's piloting skill is elite class, though how good he actually is came into question in the beginning due to becoming one of the first victims of the Protodeviln.

Upon recovery, Docker's handling of Variable Fighters showed significant improvement as observed by his superiors.

Docker was the third member of Diamond Force alongside Gamlin Kizaki and under the command of Kinryu. In his first-ever sortie battling the Varauta forces, he was hit by the drain beam that narrowly missed Gamlin. Docker was successfully taken back to base, left incapacitated for a long time. This was because his "Spiritia" or will to live, was taken away.[1][2]

When Gadget M. Chiba developed music therapy, Docker was among those who were treated and made a full recovery. He became the test pilot for the VF-19, showing exemplary skill in handling it. He was later recommended for promotion as well as being designated as the leader of a new group of elite pilots called Emerald Force, who were tasked with escorting the independent tactical unit Sound Force. 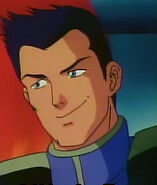 Docker in his pilot suit.

Docker during the "Operation Stargazer" briefing.

A CM eyecatch featuring Docker seated atop his VF-19.
Add a photo to this gallery

Retrieved from "https://macross.fandom.com/wiki/Docker?oldid=36023"
Community content is available under CC-BY-SA unless otherwise noted.