Dominic Udette (ドミニク・ウーデット, Dominic Udette) is an original character from the Macross Δ Scramble video game. He is a new pilot serving under Windermere's Aerial Knights.

Dominic is eager to fight for his home planet but has minimal combat experience. Even so, he tries to prove his worth to his senior wingman, Victor.[1].

Though still rather green, Dominic has the potential to become a good pilot. While trained to handle only a Draken III at first, he is able to adapt to other Variable Fighters, Destroids and even Zentradi battle armor. Shootouts are his specialty. [1].

Dominic serves as the player's representative in Delta Scramble. His name can be changed anytime. Dominic will be providing backup to his fellow Aerial Knights all throughout the game, and will also encounter pilots from past Macross series. 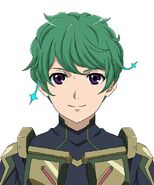 Dominic Udette
Add a photo to this gallery

Retrieved from "https://macross.fandom.com/wiki/Dominic_Udette?oldid=30609"
Community content is available under CC-BY-SA unless otherwise noted.