Elma Hoilie (エルマ・ホイリー, Eruma Hoirī?) is one of the main characters in the Macross Dynamite 7 OVA. She comes from the planet Zola and wants to become a singer like her mother, Maria Velázquez Hoilie. She also appears in Macross Δ Gaiden: Macross E, albeit much older and working for Chaos' Pipré Branch.

Elma is an energetic young girl who lives on the planet Zola and aspires to become a singer like her late mother.

Her Catsnake companion's name is Capy, who rides on her shoulders, similar to how Gubaba rides on Mylene's shoulders. She's a fan of Fire Bomber, and often sings along to their songs when they come on the radio or with a Karaoke machine in Zolan.

In A.D. 2047, she saves Basara after Poachers rough him up. She treats Basara's wound on his shoulder with teptramiracine, an antibiotic herb that causes temporary muscle weakness, as Zola's atmosphere had become infected with deadly bacteria originating from migrating space whales.

The manga Macross Δ Gaiden: Macross E takes place in A.D. 2062, sixteen years after the OVA, with Elma working as a biologist in cooperation with Chaos' Pipré Branch. She is currently analyzing the Vár-ification of protozoan and other microbiological life. She pilots the "Wind Valkyrie", a green-colored replica of the VF-19 "Fire Valkyrie" and later fires Speaker Pods to help calm rampaging whales on the planet Pipré.

One of her earlier accomplishments were published research papers on the "Galactic Whale Migration and Life". She laments how she once aspired to be a singer as a child but has since moved on.

Maria Velázquez Hoilie
Elma's deceased mother. She looked up to her as a child and wanted to become a singer to follow her mother's footsteps.

Liza Hoilie
Elma's estranged older sister. She rarely talks to her ever since she left home and joined the Patrol after their mother died.

Graham Hoilie
Elma's father. She often cooks and does the cleaning for him. He gave her mother's Valkyrie, a hand-me-down from the military so they could hunt Galatic Whales together, causing the poachers to come to their house in an attempt to steal it.

Basara Nekki
Elma's idol. After seeing him sing and play his guitar spontaneously, she decides that she wants to become his apprentice. 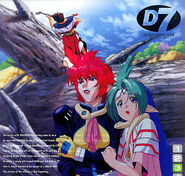 Elma and Liza with Basara singing in the back at the Cemetary of the Warriors. 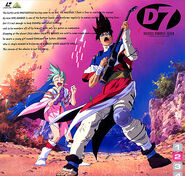 Elma and Lawrence together.

Macross Dynamite 7 cover featuring Elma and Mylene.
Add a photo to this gallery

Retrieved from "https://macross.fandom.com/wiki/Elma_Hoilie?oldid=38685"
Community content is available under CC-BY-SA unless otherwise noted.