Exxegran is a soldier with a noble spirit, and does not always agree with the military nor government's decisions. He is well aware that the administration is growing complacent with the lasting peace, a sentiment he shares with ace pilot and subordinate Silvie Gena.

Serves as a father figure of sorts for her and the rest of the Faerie Team. Their relationship is (mistakenly) broadcast to the public as a romantic one due to Hibiki Kanzaki's sensational exposé. 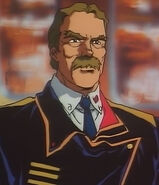 Exxegran Giri.
Add a photo to this gallery
Retrieved from "https://macross.fandom.com/wiki/Exxegran_Giri?oldid=37163"
Community content is available under CC-BY-SA unless otherwise noted.