The Fan Racer (ファンレーサー, Fanrēsā) is a civilian aircraft that appears in the Super Dimension Fortress Macross television series. It is piloted by Hikaru Ichijyo.

The fuel tank is located behind the cockpit and there is a radiator underneath. The 2000 horsepower Ceramic-Rotary-Engine that drives the double-fan has an air-intake within the vertical stabilizer. There are six rocket-boosters on the part surrounding the double-fan.[1] During a boost-to-an-inverted climb, the pilot flies the Fan Racer vertically and drops the rocket boosters. (SDFM: "Boobytrap")

1 of 2
Add photo
Hikaru was invited by his Senpai, Roy Focker, to attend the launch of the SDF-1 Macross. On Februrary 7, 2009,[2] he arrived at South Ataria Island's local airspace and was detected by the bridge of the Macross, Claudia LaSalle pointed out to Misa Hayase that Misa's screens had picked something up and so Misa decided to respond. After he identified himself as Major Focker's guest, he proceeded to fly into an aerobatic performance that Roy was providing commentary for. As the VF-1A Angel Birds led by Maximilian Jenius amazed the audience (among them, Lynn Minmay and Yoshio), so did Hikaru in his Fan Racer, much to the chagrin of Roy. The audience was most impressed by the boost-to-an-inverted-climb he did, as was Roy who actually taught Hikaru the maneuver. Hikaru landed, got out of the cockpit and walked with Roy past an FL-200 Mistral while boasting about their achievements. They approached a Petite Cola machine. The Fan Racer was left on the Display Grounds. (SDFM: "Boobytrap") 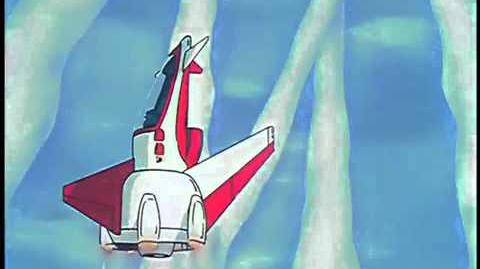 Retrieved from "https://macross.fandom.com/wiki/Fan_Racer?oldid=26047"
Community content is available under CC-BY-SA unless otherwise noted.