Fan Vernalotte (ファン・ベルナロッテ, Fan Vernalotte) is an original character from the Macross Δ Scramble video game. She is a rookie pilot under the employ of Chaos.

Fan is very methodical and gives her all in everything she does, but is sometimes prone to panicking, especially when her unit runs out of ammo[1].

Fan tries her best to adapt to any machine from Variable Fighters, Destroids and even Zentradi battle armor. She really shines when it comes to close-combat [1].

Fan serves as the player's representative in Delta Scramble. Her name can be changed anytime. Fan will be providing backup to Delta Flight all throughout the game, and will also encounter pilots from past Macross series.

Fan's usual wingman in-game. Whether they have a romantic relationship or not is unknown. 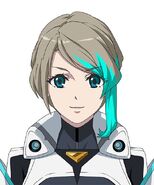