Male
Gadget M. Chiba (ガジェット・M・千葉, Gajetto M Chiba?) is an eccentric doctor with the U.N. Medical Group, and was first introduced in the Macross 7 television series.

Dr. Chiba is the foremost expert in the study of "Song Energy" aboard City 7. He was the first to discover that "Song Energy" was effective in treating patients whose Spiritia had been absorbed by Protodeviln vampires. She also developed special Song Energy-amplifying equipment which were used against the Varauta army and the Protodeviln during the Protodeviln War. He is one of the chief engineers behind Sound Force, a tactical unit manned by members of Fire Bomber.

He also served as a judge for the "Jamming Birds contest", where he hoped to find members for the music-based unit, Jamming Birds. He asked several pointed questions, such as whether the contestants have slept with another person, and their measurements.

Unbeknownst to his peers, Dr. Chiba is a rabid fan of Lynn Minmay, and keeps multiple posters and memorabilia relating to her in his apartment. This fact is made known when Gamlin Kizaki is invited by Dr. Chiba to discuss the effect of Basara's song, Planet Dance, on victims of Spiritia draining in his apartment.[1]

In 2046, he became engaged to Battle 7 bridge officer Kim Saintlaurent. 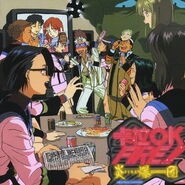 Dr. Chiba on the cover of the Macross 7 KARAOKE FIRE!! album wearing a Veffidas Feaze head mask and enjoying a karaoke party.

Dr. Chiba being cheered on by bridge officer Kim Saintlaurent.
Add a photo to this gallery

Retrieved from "https://macross.fandom.com/wiki/Gadget_M._Chiba?oldid=40766"
Community content is available under CC-BY-SA unless otherwise noted.