A veteran of many war zones, Gary is quite a likable fellow but not exactly known for his refined speech.

Many of his comrades and students consider him a big brother of sorts because of his affable personality.[1][2]

Having served in the army before becoming a teacher, Gary is knowledgeable in the workings of variable fighters and Destroids. He also has no problems with operating Zentradi battle armor when Macronized.[1][2].

Raised in a rich family with all the comforts of life, Gary found his situation lacking in excitement. He decided one day to give it all up to become a military pilot.

He later moves to Frontier and starts handling 2 jobs: By day, he is in charge of Practical Training for all courses. but by night, he is the leader of a NUNS Special Operations squad.[1][2]

Gary serves as one of the player's possible representative characters in Ace and Ultimate Frontier. His name can be changed in the beginning if he is selected. He is still playable in Triangle Frontier but his name cannot be changed anymore.

Luis Fernando
Gary's subordinate and war buddy. Though aware of Luis' penchant for being a troublemaker, Gary still covers for him from time to time especially when he drops by the Mihoshi campus. 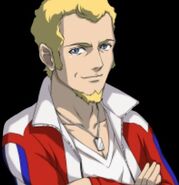 Gary's profile in MTF's Academy Mode.
Add a photo to this gallery

Retrieved from "https://macross.fandom.com/wiki/Gary_Murdoch?oldid=39422"
Community content is available under CC-BY-SA unless otherwise noted.