Gavil (ガビル, Gabiru, Gavil) is a Protodeviln male with humanoid form and one of the primary antagonist in the Macross 7 television series. He also makes a cameo in Macross FB7 Galaxy Flow Soul: Listen to My Song!. He was awakened by Geperuniti‎ to tame Glavil. Gavil and Glavil later combine as one being known as GaviGla.

Gavil is a arrogant and narcissistic Protodeviln, who has unique sense of beauty. He fetishes beauty to the point of comparing anything to his crazed ideals, whether it be creation or destruction.

Gavil is a miclone-sized Protodeviln with wings and covered in feathers. He has antennae which can absorb the Spiritia of his enemies. He often works in tandem with Glavil during Anima Spiritia harvesting operations. When fighting alone, he would pilot a FBz-99G Zaubergeran into battle.

Gavil would later combine with Grabil to form GaviGla, increasing their combat ability. Glavil himself would grow massive wings, and the shockwaves emitted from their entire body are powerful enough to destroy a battleship. GaviGla can also fire a powerful particle beam from his left hand.

Gavil was awakened by Geperuniti to stop the rampaging Glavil. He then pledges to serve Geperuniti and is given command of the brainwashed soldiers of the Macross 5 fleet. Time after time, he and his minions would do battle with the forces of the Macross 7 fleet in an attempt to take their Anima Spiritia. At first, he found Basara Nekki to be a nuisance, but that changed when Sound Force slowly pushed back his forces. He also develops a strong rivalry with Diamond Force's ace pilot Gamlin Kizaki.

During the final battle, Gavil unites with Glavil, and the two form a near unstoppable unit against the forces of the Battle 7. Only through Basara's song are the two defeated, and somehow evolve into a self-sustaining Spiritia producing being and are forced to flee the galaxy, along with their master, Geperuniti for good.

Gavil enjoying the beauty of whatever he is touching. 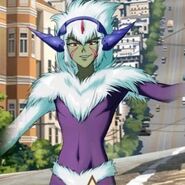 The final form of GaviGla.

Another magnificent Gavil card.
Add a photo to this gallery

Retrieved from "https://macross.fandom.com/wiki/Gavil?oldid=37868"
Community content is available under CC-BY-SA unless otherwise noted.