Hilda is cool beauty notorious among the students for being overly strict.

Even so, she isn't beyond praising people if they meet her standards in terms of performance.[1][2]

Having seen a lot of action as a soldier before becoming a teacher, Hilda knows a lot about variable fighters and Destroids. She can also skillfully use Zentradi battle armor when Macronized.[1][2]

At a young age, Hilda was raised in a military atmosphere by her father who was a soldier. With the latter acting as both a single parent and strict trainer, she not only developed a rough, almost masculine personality, but also solid piloting skills. Every now and then she likes to dabble in cooking.

By day, she is a teacher in Mihoshi Academy, in charge of Basic Training for all courses. By night, she is second-in-command of a New United Nations Spacy Special Operations squad.[1][2]

Hilda serves as one of the player's possible representative characters in Ace and Ultimate Frontier. Her name can be changed in the beginning if she is selected. She is still playable in Triangle Frontier but her name cannot be changed anymore.

Gary Murdoch
Hilda's fellow teacher and superior in the New United Nations Spacy Special Operations squad. Sometimes loses faith in him since she feels that he isn't professional enough as a commander.

Luis Fernando
Though Hilda respects Luis as a pilot, she doesn't like his loose cannon attitude, much less his taste in clothing. 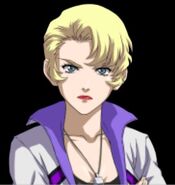 Retrieved from "https://macross.fandom.com/wiki/Hilda_V._Bergen?oldid=39418"
Community content is available under CC-BY-SA unless otherwise noted.