Itsuki is a rather serious person in both his professional and private life. His inability to effectively display emotion with his facial expressions cause misunderstandings on occasion, with other people thinking that Itsuki is cold and heartless.[1]

His penchant for being detailed when it comes to explanations leads Itsuki's talks to drag on for a for quite a long while. As a result, he is avoided by many co-workers and students.[2]

Itsuki always judges each situation calmly, making perfectly-timed and detailed tactical coordination reports. He is considered as one of the most efficient operators in his unit.[2]

By day, Itsuki is a teacher of Mihoshi Academy in charge of a Lecture & Training class for all courses, but by night, he's on CIC detail as part of of a New United Nations Spacy Special Operations unit.

Itsuki serves as one of the player's operators in all of the Frontier games, selectable between timeframes like the rest.

Pinon Colette
Itsuki's co-worker and co-teacher/student in the same school. He constantly has to deal with Pinon's attempts to hijack his class schedule, since they teach practically the same subject. 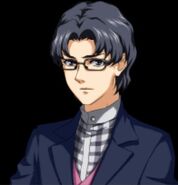 Itsuki's profile in MTF's Academy Mode.
Add a photo to this gallery

Retrieved from "https://macross.fandom.com/wiki/Itsuki_Yamashiro?oldid=39424"
Community content is available under CC-BY-SA unless otherwise noted.