Kaname Buccaneer (カナメ・バッカニア, Kaname Bakkania) is a character from the Macross Δ television series. She is the 22-year-old leader of the tactical sound unit Walküre.[1] Her catchphrase is "Music is Life" (歌は命 Uta wa Inochi). She is nicknamed "Kana-Kana" (カナカナ) by Makina Nakajima.

She has consistently ranked on the top of many fan polls as favorite character of the entire Macross series.

Kaname is the oldest and most experienced member of the tactical sound unit Walküre. She acts as the 'big sister' of the team and manages schedules and mission briefings.

Kaname is usually seen socializing with Arad Mölders, leader of Delta Flight, which has led to speculation about the true nature of their relationship. Meanwhile, her attitude towards ace pilot Messer Ihlefeld slowly changes through the course of the series, leading the two to share a deep mutual respect for one another.

Kaname is originally from the wartorn planet Divide. As a child, she always dreamed of singing and eventually débuted as a solo artist, performing for several years and had such hits as AXIA~Daisuki de Daikirai~. She would eventually be recruited by Chaos after they discovered latent "fold receptors" in her singing voice.

In 2063, Kaname and a young hacker named Reina Prowler became members of the singing group Walküre, whose objective was to cure people of the Vár Syndrome. A year later, Chaos also recruited Makina Nakajima, Claire Paddle and Lydie LeGrand to join the group. Lydie quit midway through the auditions. Kaname assumed the role of center for Walküre, however, due to the lack of synergy in the group, their efforts proved ineffective against the Var. Lady M eventually laid down an ultimatum for the Walkure: If they fail in the next operation, they would be disbanded.

Things began to look up when Kaname's longtime colleague, Arad Mölders, suggested that Delta Flight coordinate with the group during live performances. Makina then designed elaborate costumes for each member. Their efforts paid off, and they began seeing success in their missions. It was also during an operation in Planet Alfheim that Kaname met the dashing ace pilot Messer Ihlefeld. However, despite their best efforts, Claire quit the group due to combat fatigue and stress.

Kaname would continue to act as the center of the group, but lost the position when Chaos replaced her with the mysterious Mikumo Guynemer.

In 2067, Chaos announced they were holding an audition to recruit a new member for Walküre on the planet Ragna. Kaname and the rest of Walküre were on a routine patrol mission on the planet Al Shahal when a Var outbreak began on Shahal City. A strike force led by the Aerial Knights launched a sneak attack on the planet's garrison. During the battle, Kaname detected Freyja Wion's unusually powerful "fold receptors" as she was singing. Freyja and her companion, Hayate Immelman, miraculously survived the battle and were debriefed by her and Delta Flight. Kaname then recommended Freyja try out for the auditions being held on Ragna. Freyja took her to her word and some time later, joined Walküre.

As the conflict with Windermerians progressed, Kaname discovered Messer suffered frequent Var attacks that he barely managed to control via listening to her song, AXIA~Daisuki de Daikirai~, on his bracelet music player. This prompted a change in Kaname's demeanor towards Messer, who never really considered her feelings towards him. His untimely death at the hands of Keith Aero Windermere made her realize that she cared about him more than she first realized. Messer was given a formal Ragnan funeral ceremony, where his spirit could be free with the jellyfish. She kept his music bracelet as a memento, and treasured it well after the war with Windermere ended.

Arad Mölders
Kaname has a close working relationship with Arad, and the two would frequently hang out and drink together. However, nobody has ever confirmed if the couple were romantically involved.

Messer Ihlefeld
Two years prior to the events of the series, Messer became infected by the Var during an operation on the planet Alfheim, but he was "saved" after listening to AXIA~Daisuki de Daikirai~, a song sung by Kaname. Since that incident, Messer carried a special 'song bracelet' that would only play AXIA, as a means of containing the virus. When Messer joined Delta Flight, he made sure to protect Kaname from harm.

Mikumo Guynemer
Kaname was awestruck the moment she heard Mikumo sing. She was relieved that she no longer had to bear the burden of being the lead vocalist of the group. The two have since maintained a professional relationship. 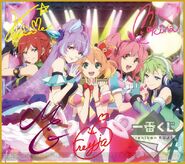 An Ichiban Kuji featuring Walküre, with Kaname on the side.

An art plate of Kaname singing for both men in her life, Arad Mölders and Messer Ihlefeld in Uta Macross Sma-Pho De-Culture.

Kaname, the leader of Walküre.

Kaname decked out in full gear, ready to dance.

Kaname eager to welcome you to Walküre World.

Kaname singing for the love she lost.

Kaname in a fantasy scene in Uta Macross where she never got to marry her one true love.

Kaname quietly contemplating her life, as little Q-Lulu sleeps on her lap.

Kaname holding on to a memento, singing while remembering the memory of her fallen love, Messer Ihlefeld.

Kaname in costume for the Halloween event for Uta Macross.

A lovely scene of Kaname leisurely walking with Messer, as Mikumo Guynemer watches on. 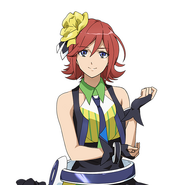 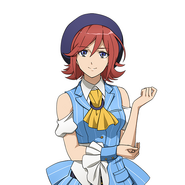 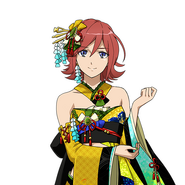 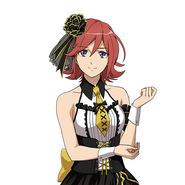 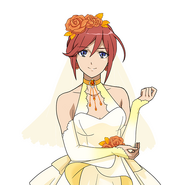 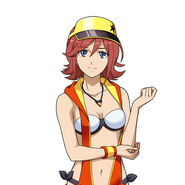 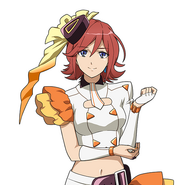 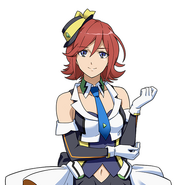 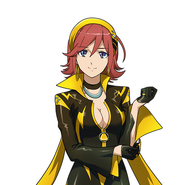 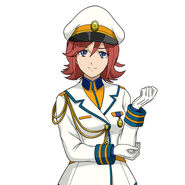 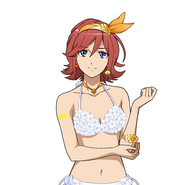 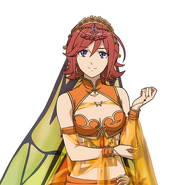 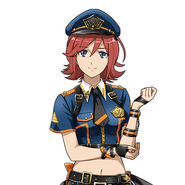 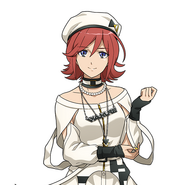 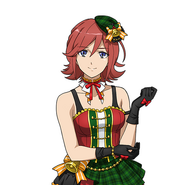 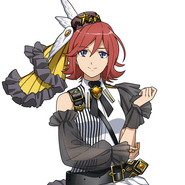 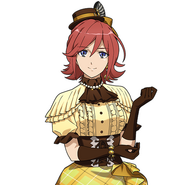 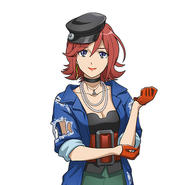 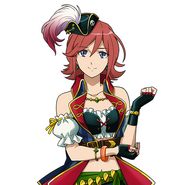 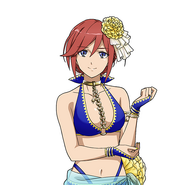 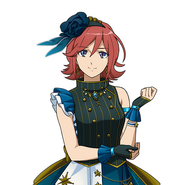 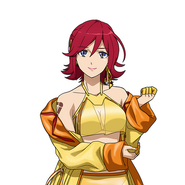 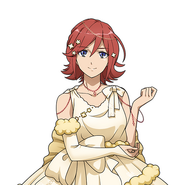 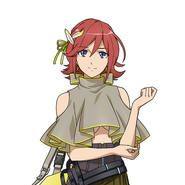 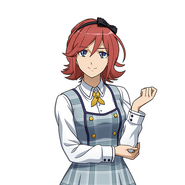 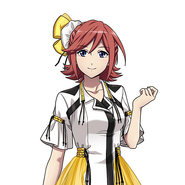 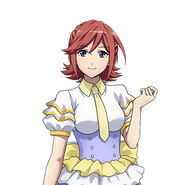