Kim hails from the South Asian Federation. As one of Macross bridge operators, she is mainly in charge of ship's control and broadcasting system. She has a short hair cut and boyish appearance and is known for being a little forward towards others. She is a sloppy in her work, as she tends to gossip, hoping nobody would catch her.

She acts like an elder sister to the young and naive Shammy Milliome, and often ejoys seeing her reaction with an offbeat remark or overconfident attitude.

Her counterpart in film The Super Dimension Fortress Macross: Do You Remember Love? differs in hair color only. She name was also switch with Shammy at the time, due to an error in the credits.

On February 7, 2009,[1] Sergeant Kim Kabirov was present on the bridge of the SDF-1 Macross. When the banter began regarding First Lieutenant Misa Hayase's lack of a love life, she responded to First Lieutenant Vanessa Laird's "Wow! Maybe our First Lieutenant is interested in men." statement with "Haha! Could've fooled me!". (SDFM: "Boobytrap")

Later that day, during the calm before the battle, Kim was listening to the Politician's conversation with Captain Global. These are one of several instances in which Kim would attempt to listen in and gossip among her peers. She would often catch the ire of her superior Claudia LaSalle, who did not tolerate them speaking ill of Misa Hayase and her love life.

While Vanessa and Shammy eventually got married, Kim would remain in the military due to a lack of prospects. Contrary to speculation, she rose up to become a chief operator, and a decade later, the deputy chief of her very own cruiser (Major). Although it was rumored that she became a Captain in the end, she still dreamt of having an ordinary married life.

In A.D. 2045, she ended up settling alone at the General's Mansion on the planet Eden.[2] She was later mentioned in the novelization of Macross Frontier, which was set in 2059. She was apparently promoted as Commander of the New United Nations Spacy and served as captain of Macross 13, and there was even an institution in the fleet known as "Kabirov School".[3]

Kim enjoys gossiping with her colleagues on the SDF-1 Macross.

Kim thinking about something. 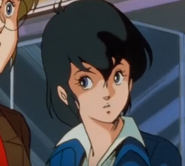 Kim being cute.
Add a photo to this gallery

Retrieved from "https://macross.fandom.com/wiki/Kim_Kabirov?oldid=40514"
Community content is available under CC-BY-SA unless otherwise noted.