As a self-appointed genius, Kite has the potential to achieve the highest ranking possible in his profession as pilot for Echo Flight, part of Chaos' Pipré Branch. However, he has little motivation to apply himself, and is often absent minded when doing his job.

He considers himself an idol "otaku", and has dedicated much of his time being Thrones' biggest fan. He feels he understands the sorrow and passion behind idol Pirika Polywanov, and has disdain for newbies who claim to be her fan. His first meeting with Pirika proved to not be what he imagined, as she treats him with little regard. Ultimately, this inspires him to "change" to the man that would protect her. 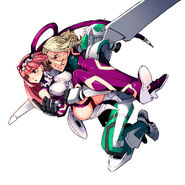 Kite holding onto Pirika in this tribute art of the cast of the manga.
Add a photo to this gallery

Retrieved from "https://macross.fandom.com/wiki/Kite_Kinjo?oldid=41529"
Community content is available under CC-BY-SA unless otherwise noted.