Luis is an odd character that pops up at Mihoshi Academy from time to time. Also well known for his almost-limitless burning passion for life.[1]

Most people don't know much about Luis, but those who do are aware that he has the know-how to pilot variable fighters and Destroids. When Macronized, he's also quite at home using Zentradi battle armor.

He often handles the aptitude exams of New United Nations Spacy newcomers and has the proficiency to match.[1]

A passionate fellow with a long-standing love for the big blue sky, Luis' wild attitude and straight-to-the-point tendencies easily gets him into all sorts of trouble in both his personal and professional life. Makes a hobby out of doing impromptu street performances and collecting shirts with outrageous designs.

Though most people see him as nothing more than an eccentric campus trespasser, Luis' actual identity is that of a New United Nations Spacy Special Operations pilot.

Luis serves as one of the player's possible representative characters in Ultimate Frontier. His name can be changed in the beginning if he is selected. He is still playable in Triangle Frontier but his name cannot be changed anymore.

Gary Murdoch
Commanding officer and war buddy. Gary is the reason why Luis can go in and out of Mihoshi Academy without being reported to the authorities. 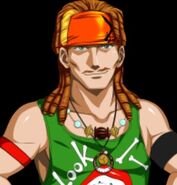 Luis' profile in MTF's Academy Mode.
Add a photo to this gallery

Retrieved from "https://macross.fandom.com/wiki/Luis_Fernando?oldid=39434"
Community content is available under CC-BY-SA unless otherwise noted.