Macross Δ Movie: Passionate Walküre (劇場版マクロス のワルキューレ, Gekijō-ban Makurosu Deruta Gekijō no Warukyūre?), also known as Macross Delta: Gekijou no Walküre, is a 2018 anime film adapted from the Macross Δ television series. The film is set in 2067, eight years after the events of Macross Frontier. It premiered in February 9, 2018 in TOHO cinemas.[1] A sequel, Macross Δ Movie: Absolute Live!!!!!!, scheduled to be released in 2020, features a sixth member of Walküre.

Production of the theatrical version began more than a year following the end of the TV broadcast in October 2016.

In 2067 AD, a strange disease called "Vár Syndrome" causes humans to become berserk, lose themselves and rampage. The antidote is the tactical sound unit Walküre. In order to quell in the symptoms of "Vár Syndrome", their tour of the stars with live performances expands.

At the same time, however, variable fighter troops called "Aerial Knights" of the "Kingdom of the Wind" make their moves to conquer the entire Brísingr Cluster.

Entangled with the mystery of the Protoculture's legacy, the curtain is raised for the story of passionate teamwork and love larger than a star system.[2]

Following mankind's devasting war with the Zentradi, a New United Nations Government was formed between the two races, which enacted a space emigration program using super spatiotemporal navigation and communication technology called "fold" with the sole purpose of the survival of their species. For over half a century, humanity and Zentradi expanded across the Milky Way. As time passed, a disease known as the "Vár Syndrome" began spreading among humans and humanoids alike. To counter this, Chaos, a paramilitary enterprise was formed, along with the tactical music unit Walküre, whose singing voice emits a "biological fold wave" that calms down Var. Soon after, the variable fighter (Valkyrie) unit Delta Flight was formed to safeguard the group.

In 2067, deep within the Brísingr Globular Cluster, Walküre and Delta Squadron encounter an unidentified variable fighter unit while suppressing a Var outbreak that occurred in a nearby system. During the battle, Hayate Immelman, rookie pilot of Delta Squadron, detected a strong biological fold wave onboard a cargo ship and proceeded to investigate its origins, despite protests from his wingmate, Mirage Farina Jenius. Hayate then encounters a young Windermerian girl named Freyja Wion, who calms down the Var by her song, AXIA.

Freyja, who smuggled onboard the cargo ship in hopes of entering an audition to join Walküre, was nevertheless recruited and began her rigorous training on Ragna, Walküre’s home base, but was unable to fully demonstrate her ability. To cheer her up, Hayate flew with Freyja on his Valkyrie where the two were eventually caught by Mirage and their instructor Messer Ihlefeld. Later, members of Walküre hold a special welcoming party for Freya in a bath house where they shared hardships they faced forming the group. Mikumo Guynemer, Walküre's lead singer, isn't present but sings along as she hears their singing.

Soon after, Walküre hold a debut live event introducing Freyja on the planet Al Shahal. While concert was underway, a mysterious singing voice echoed, and N.U.N.S. and Zentradi troops began succumbing to the Var and rampaged throughout the city. The unkown enemy forces enter the battlefield and reveal their identity as the “Aerial Knights", an elite unit from Freya's home of the Kingdom of the Wind. Roid Brehm, leader of the Kingdom of the Wind, declared open war against the New United Nations Government. Roid believes that the Windermere are the legitimate successor of the intergalactic civilization race known as the Protoculture, and that their goal is to liberate the sector from exploitation of the New United Nations Government. Roid attemps to complete the fold wave amplification transmission field by restoring the Protoculture ruins embedded upon every planet in the globular cluster by manipulating the Var through the power of King Heinz Nehrich Windermere's singing voice.

Freyja, distraught that her people start such a senseless war, is given much needed encouragement after Walküre and Chaos members throw her a surprise birthday party. Freya tears up and hopes that, despite her short lifespan, she can one day be shining example for the people of Windermere. As the birthday progresses, Freyja is touched when Hayate creates an artificial snow garden reminiscent of hometown, and the two share a sweet song together. At the same time, Messer Ihlefeld, ace of Delta Squadron, revealed to Walküre’s leader Kaname Buccaneer, that her song saved him many times in the past. Messer’s body, which has repeatedly been affected by the Var, has however reached its limit, thus forcing him to prematurely retire from active duty.

In order to figure out the plan of the Windermerian forces, Chaos delivers a special video with a Walküre-charged virus to the galaxy network, causing mass communication disruption. Walküre and Chaos detect a powerful biological fold wave in the ruins of Al Shahar. Roid then sense Walküre is trying to interfere with the Protoculture ruins through song. He makes King Heinz sing "The Song of the Wind", which resonates and draws out a huge Protoculture structure from underneath several planets. Under the influence of the resonance, Heinz’s rapidly crystallizes, a sign of rapid aging for Windermerian people. The crystallization occurs also on the hands of Freya. As the song ceases, Walküre and Delta Squadron suffer defeat in battle against the Aerial Knights. In their most desperate hour, Messer rushes into battle, and thanks to the special song of Kaname, a fierce dogfight begins with the opposing ace Keith Aero Windermere. Messer reaches the limit of his body and is fatally shot and lands his Valkyrie and lays dying in the arms of Kaname. Hayate and Mirage are shot down by Windermerian forces and Mikumo Guynemer, is kidnapped, along with the other members of the team.

Roid tells the remaining Walküre members that Mikumo is actually a clone made from the cells of the legendary Windermerian "Star Singer", which were stolen from Windermere by New United Nations Spacy forces. This revelation is broadcasted throughout the galaxy, and soon creates a massive backlash against Walküre. Frejya, defiant of her people, say that they will continue to sing as long as there are people who need their song.

In order to rescue Walküre, Chaos launches a surprise attack strategy called "Operation Ragnarok" against Windermere main fleet. Meanwhile, Hayate and Mirage infiltrate the enemy ship and recover Messer's capture Valkyrie. The Windermere fleet suddenly emerges in Ragna via a fold operation. The Protoculture structure is activated by the singing voice of Mikumo, who was manipulated by Roid to become the "Star Singer", a process which would integrate all living consciousness throughout the entire galaxies one by one through the Protoculture structure’s network. As people begin losing their minds, Hayate and Walküre regain consciousness as a result of the singing voice of Freya thinking about Hayate, and Mikumo breaks down the spell in response to the singing voice of her companions. However, in response to the emotions of the Roid’s ascension, the protoculture system starts to go haywire. Hayate and Freyja’s love moves people back into consciousness, and this convinces the remaining Aerial Knights that their true enemy is Roid. Hayate and Mirage rush into the giant temple and succeed in rescuing Mikumo and destroying the central core. Keith joins the fight and confronts Roid, who remembers the two shared a childhood bond. They are both killed in the ensuing battle. The war is finally over as King Heinz Windermere offers peace negotiations to the New United Nations Government.

Shortly after, Chaos and Walküre come together and return the Messer's soul to the sea in accordance with Ragnan tradition. Walküre dedicates a "song of life" under a flock of jellyfish that floats to the sky as dawn breaks.

On August 5, 2017, Walküre appeared in the outdoor music festival "ROCK IN JAPAN FESTIVAL" on the day of the film production was announced. The official title and release date would be announced at an announcement event on October 9 of the same year.

Previously, the production for the first theatrical adaptation of Macross Frontier was announced immediately after the television broadcast of the last episode, but in the case of Macross Δ, the theatrical version was not yet determined after the end of its broadcast. Members of Walküre thought that the 2nd live concert event in January 2017 (A two day concert event in Yokohama Arena)[3] would have been their final appearance as a group, but series director Shōji Kawamori watched the concert and was "deeply impressed" and in the press meeting said, "I must not end here to do Walküre, if allowed, I would like to continue the series,".[4] He spoke to the surrounding staff, claiming he would "absolutely want to do theatrical version".[5]

The film adapts the scenario of the TV version, making minor story changes and adding new scenes / re-shoots. Kawamori tried to negotiate that the series be split into two films, but was denied. Due to budget restraints, he and his staff tried their best to "reform and reconfigure the composition" of the story.[6]. As with the theatrical adaptations of previous series, several notable parts that were truncated and altered, such as how the emphasis now focused heavily on Walküre, and development of the characters like Mirage Farina Jenius fell on the wayside. Another vision Kawamori had but could no longer pursue was to emphasis the two Valkyrie teams duking it out. Other changes are when Walküre's performs several new songs in several existing scenes in the original series, and key battle scenes were heavily modified. From the impression received by Walküre's 2nd live, "high passion and high tension" makes the movie version motif.[7]

On May 11, 2018, the MX 4-D version supervised by director Kawamori and screened at each theater of TOHO Cinemas.[8] The film was a massive box office success, and stayed in theaters for several months. A second Walküre film has since been announced for release in 2020.

Passionate Walküre rearranged the opening, which now has an opening battle scene with Hayate already part of Delta Flight.

Hayate and Freyja meet onboard a cargo vessel instead of on Al Shahal.

Certain Freyja's scenes have been rearranged to now happen on Ragna.

Freyja gets to know Walküre better in a new bath house scene.

Bogue's sparkle out of control as he struggles with his feelings for Reina Prowler.

A new scene featuring Messer's final moments with Kaname has been added.

Mirage converting a Sv-262 Draken III to her colors.

Freyja leading Walküre to save Mikumo Guynemer after being captured by Roid Brehm.

Walküre and the rest of the Delta crew celebrate the final sendoff of Messer's soul to the ether. 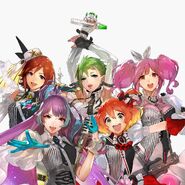 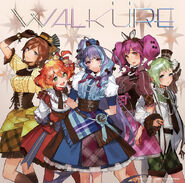 Walkure Won't Betray You album cover, featuring new songs such as "Dancing in the Moonlight" and Change!!!!!
Add a photo to this gallery

Retrieved from "https://macross.fandom.com/wiki/Macross_%CE%94_Movie:_Passionate_Walk%C3%BCre?oldid=42531"
Community content is available under CC-BY-SA unless otherwise noted.