Macross 15th Anniversary is one of the series' first ambitious anniversary event. It saw the release of numerous tie-ins and merchandise spread throughout the year. The year was significant for the property, not only that it celebrated the 15th anniversary of Super Dimension Fortress Macross television series, but it had Macross One Night Stand, the first major crossover live concert.

The Super Dimension Fortress Macross: Do You Remember Love? (Game) for the Sega Saturn was also released on June 6, 1997, featuring a newly animated prologue to the film of the same name, and new cutscenes in CG that flesh out the film's story.

Super Dimension Fortress Macross also saw a special anniversary box set release. The album for the radio drama Macross Generation was also released on April and May 1997, which featured a new single "Take Courage". It had a new story regarding a singing contest, and the legacy of Lynn Minmay was the focal point. 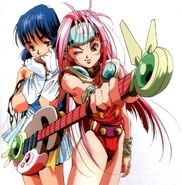 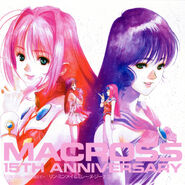 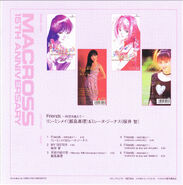 The back cover of the singles collection, with photos of Mari Iijima and Tomo Sakurai. 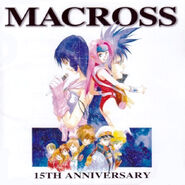 The cover to a special anniversary software, jacket art by Haruhiko Mikimoto. 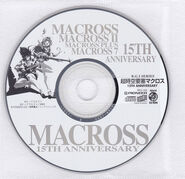 The CD of the 15th anniversary program. 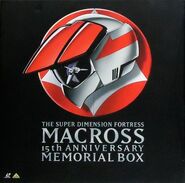 The cover to the 15th anniversary Laserdisc box of of Super Dimension Fortress Macross. 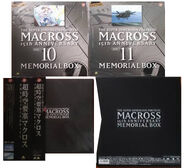 The Laserdisc box set contained at least a dozen discs due to the limited storage capacity of the format.

Animerica issue for June 1998, featuring a write-up of the series' 15th anniversary "Summer of Love". The article cites October 3, 1997 as the original airdate of the series and point of the celebration.

A magazine spread featuring an ad for the first part of Macross Dynamite 7.

An illustration card of Basara Nekki.

A plastic model figure anniversary figure of Lynn Minmay in her outfit from The Super Dimension Fortress Macross: Do You Remember Love? released by Arii Plastic Model.

Minmay as a student in Yokohama.

Misa Hayase in a bikini anniversary figure. All artwork by Haruhiko Mikimoto. 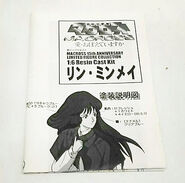 A manual of the plastic figure.

A line up of Arii Plastic Model's anniversary figures.

Catalogue for Macross' 15th anniversary commemorative toys and figures. Released by Big West and ACII in 1998. 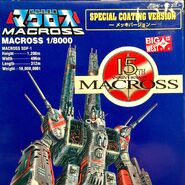 An anniversary exclusive SDF-1 Macross hobby kit.
Add a photo to this gallery

Retrieved from "https://macross.fandom.com/wiki/Macross_15th_Anniversary?oldid=41428"
Community content is available under CC-BY-SA unless otherwise noted.