Macross 30th Anniversary Project ambitious anniversary event that saw the release of numerous tie-ins and merchandise spread throughout the year. The year 2012 proved to be a significant milestone for the series, not only that it was the original Super Dimension Fortress Macross television series' 30th anniversary, but it also happens to be the year the SDF-2 Megaroad-01 launches into space. The year was formally kicked off with the Miss Macross 30 Contest, where the winners would be cast on various Macross projects throughout the year.

The most significant anniversary releases would be Macross The Musicalture, the franchise's first on-stage jukebox musical and Macross 30: The Voice that Connects the Galaxy, an ambitious video game for the Sony Playstation 3. The year also saw the release of various editions of Blu-ray remasters for The Super Dimension Fortress Macross: Do You Remember Love?,[1] Macross Frontier, Macross 7[2] and Super Dimension Fortress Macross.[3][4]

The year was kicked off by a special exhibition entitled "30th ANNIVERSARY Macross Super Space-Time Exhibition ~ Invite at Valkyrie!", which treated fans to a 1:1 scale statue of Ranka Lee, Sheryl Nome and Lynn Minmay, along with the life-size VF-25 Messiah. The event took place from April 28 to May 6, 2012 at the Ikebukuro Sunshine City Exhibition Hall. Elsewhere, the Tokyo Anime Center in Akihabara had a large VF-1J Valkyrie plastered on its exterior, which helped excite fans for what was to come towards 2013.[8]

Meanwhile, throughout the year, fans enjoyed many smaller, but no less significant product releases. New entries to the Macross Chronicle were created, with new art drawn by Hidetaka Tenjin. Banpresto, Collectage and Figuarts released numerous Macross Frontier and Macross 7 character statues. Tama Hikoki also released "chibi" versions of various variable fighters. The collected edition of the manga adaptation of Macross Plus was also released earlier in the year. The Good Smile Company even created a Sheryl Nome bus decal. A special pop-up event, "MACROSS: THE DESIGN @ PARCO" took place at the local Parco mall in Nagoya. The exhibit came with a pop-up cafe, and exclusive prints of Alto Saotome and the rest of the cast in local festival wear. Meanwhile, clothing company COSPA released exclusive anniversary clothing designs.

Other minor releases include the Macross SP Cross Deculture mobage. The year also saw exclusive 30th anniversary painted DX Chogokin YF-29 Durandal. The year culminated with the Macross Crossover Live 30 concert, which featured many of the series' singers up to that point.

The festivities were extended throughout 2013, which had Macross: The Museum, a special in-universe Macross museum set in A.D. 2059, was launched on June 2013 at the Tezuka Osamu Manga Museum.[9] The museum carried exclusive prints featuring a crossover between Frontier characters and Princess Knight.[10] The year also saw the relaunch of weekly visual encylopedia, Macross Chronicle by Deagostini Japan.

The Macross Frontier series and films were released on Blu-ray during the anniversary.

Poster for the Macross: The Design exhibit in Nagoya.

The menu from the Nagoya pop-up cafe, from the Macross: The Design exhibit. 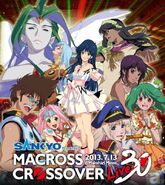 Exclusive merchandise at Macross: The Museum held at the Tezuka Osamu Manga Museum.

Retrieved from "https://macross.fandom.com/wiki/Macross_30th_Anniversary_Project?oldid=41643"
Community content is available under CC-BY-SA unless otherwise noted.