Macross 7: Trash (マクロス7 トラッシュ) is an 8-volume manga series by Macross character designer Haruhiko Mikimoto, serving as a side-story to Macross 7. It takes place in the year 2046, and is focused on Shiba Midou (a young "T-Crush" athlete who is rumored to be an illegitimate son of the famous Maximilian Jenius), Mahara Fabrio (an ex-military officer), and Enika Cheryni (Shiba's girlfriend, who becomes the next "Minmay Voice" singing idol), as the three become entwined in a military plot.

Unlike many other Macross-related manga, this series does not feature any mecha or combat, instead focusing on the characters themselves. It was serialized for 52 monthly chapters in Shōnen Ace magazine from October 1994 to May 2001, then published as tankōbon from 1995 to 2001 by Kadokawa Shoten. It also received a drama album.

The story takes place in the Macross 7 fleet in A.D. 2046 of the Macross timeline. The story revolves around a sport called "T-Crush", a futuristic version of roller derby but with hovering roller blades and fighting. As the story progresses, weapons are added to the equipment and it becomes a one-on-one combat tournament.

Another plot element is the "Mind System" used to power the weapons in the tournament. The system was in development seven years before the story begins and it caused a fatal accident during a military training session. On the surface, the system converts the emotions of a person into energy but the true functionality of the system is hidden until late in the story.

The story begins with Mahara Fabrio quitting the military and being asked by Colonel Bacelon to seek out talented people and recruit them as pilots. By chance, she meets Shiba Midou, a T-Crush player, and she becomes the coach of his team. Bacelon supplies the teams with weapons powered with the Mind System and organizes a tournament. Mahara became suspicious of Bacelon's intentions but is forced to cooperate after she was caught breaking into his data files. The team makes their way to the final where the truth is revealed.

Trash was published and released by Kadokawa Shoten. The new omnibus edition was released from November to December 2009. 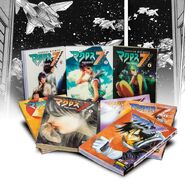 A full set of the French release of Macross 7: Trash manga by Norma Comics. 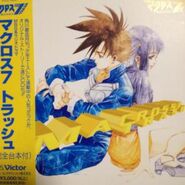 The Macross 7: Trash Radio Drama CD which was released on September 1996.

A splash page of Macross 7: Trash featuring Mylene Flare Jenius in the background.
Add a photo to this gallery

Retrieved from "https://macross.fandom.com/wiki/Macross_7:_Trash?oldid=40998"
Community content is available under CC-BY-SA unless otherwise noted.