Described as Tokyo's "loudest" film festival, the Bakuon Film Festival organizers conduct touring events across Japan, with "...fear-inducing speakers in tow" according to TimeOut Magazine. Included during the festivities is a pop-up store, complete with event-specific merchandise.

Seven films were screened from January 1 to 24, 2019, at Shinjuku Piccadilly. A meet-and-greet was held with Kiyono Yasuno, who played the role of Kaname Buccaneer in Macross Δ. Meanwhile, the Osaka screening event was held at Namba Parks Cinema in Osaka on February 9, 2019.[2]

Various Macross films were screened on April 2019 at 109 Cinemas Nagoya, in the Aichi Prefecture of Nagoya. 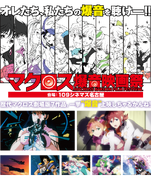 Promotional ad featuring the films that were screened during the festival.

Sample merchandise sold at the event.
Add a photo to this gallery

Retrieved from "https://macross.fandom.com/wiki/Macross_Bakuon_Film_Festival?oldid=39209"
Community content is available under CC-BY-SA unless otherwise noted.