A previous crossover live, Macross 25th Anniversary Live: Minmay meets Fire Bomber was held in 2007, which also marked the debut of Megumi Nakajima. Prior to that, Macross One Night Stand was the first major crossover live performed in 1997.

Macross Crossover Live A.D. 2009x45x49 is a crossover concert event featuring artists from various Macross series over the decades. This is the second event to mark the "first year of Macross" after the Macross "space launching ceremony" in February. (The first episode of Super Dimension Fortress Macross aired in 1982, but its story was set in February of 2009.) The concert was held on October 2009, and the first Macross Frontier film, Macross Frontier Movie: The False Songstress was set to open in Japan on November 21, 2009.

Tickets were available early to people who joined the F-Tama club. People who joined the club could purchase tickets between July 13 and July 29, 2009. The organizers plan to offer the remaining tickets to the general public on August 22, initially through the FamilyMart convenience store chain’s ticketing system.

News regarding the suicide of "Do You Remember Love?" composer Kazuhiko Kato had not been relayed to Mari during the first day of the concert on Saturday, and during Sunday's performance, Mari gave a heartfelt speech Kato's influence, and how despite the death of Hikaru Ichijyo's voice actor Arihiro Ayase and Kato, she would live on. She did morbidly state that since she lived in the United States, if she herself died, that the only one to find her would possibly be the postman. For her final song, she sang "Do You Remember Love?".[1]

The concert was also noted for the unexpected appearance of Hiroko Kasahara, the singing voice of Ishtar from the Super Dimensional Fortress Macross II: Lovers Again OVA. She sang "Mou Ichido Love You", giving one of the best performances during the event.

Akino Arai also made a surprise appearance in the concert, singing "Voices" and "WANNA BE AN ANGEL" to the accompaniment of strings and a piano, to the delight of the audience.

The true highlight of the concert came towards the encore, when the noted Fire Bomber meets Sherry Nome actually occurs. May'n, Chie Kajiura and Yoshiki Fukuyama sing a powerful rendition of "Totsugeki Love Heart". The song was followed up by Lynn Minmay meeting Ranka Lee, with Mari Iijima and Megumi Nakajima singing "Angel's Paints". Finally, every singer gathers to sing the anthem "Iki Wo Shiteiru Kanjiteiru".

The concert event poster beside two Macross Frontier-themed delivery segways. One has a Nyan-Nyan restaurant theme as a nod to the opening of the film Macross Frontier Movie: The False Songstress.

Detailed listing of the concert merchandise available for sale, including the usual T-shirts, fans, tote bags and posters. 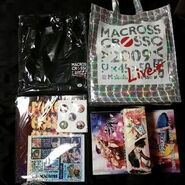 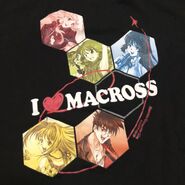 The concert events on both days were completely sold out. Photo by Gwyn Campbell.
Add a photo to this gallery

Retrieved from "https://macross.fandom.com/wiki/Macross_Crossover_Live_A.D._2009x45x49?oldid=39306"
Community content is available under CC-BY-SA unless otherwise noted.