Macross Digital Mission VF-X (マクロス デジタルミッション ブイエフエックス, Makurosu Ddejitaru Misshon Buiefu Ekkusu) is a 3D shooting game developed by UNiT and published by Bandai Visual for the Sony Playstation, released on February 28, 1997. The game takes place a year after the events of the Macross 7 television series and follows the VF-X Ravens unit. The game was followed by a sequel, Macross VF-X2 in September 2, 1999.

This is a shooting game based on the Macross series, and is a wholly original setting not based on any previous works or series. It is set one year after the Macross 7, which had been the most recent of the franchise at the time. The game was initially planned as a fully polygonal 3D shooter, and the Sony PlayStation perfectly suited the game's ambition in terms of graphics.

Development began in 1995 and has long been shown on several game magazine's release schedule as software with a release date pending. The development involves the main creators of the Macross series, such as Shōji Kawamori (Valkyrie Design, Supervisor), Kazutaka Miyatake (Ship / Mecha Design), Haruhiko Mikimoto (Main Character Design). The game was noted for including the transformable modes of the VF-4 Lightning III, which had only been previously seen as a fighter on The Super Dimension Fortress Macross: Flash Back 2012.

Until the game's development, Macross-related games were released on family computers, PC engines and arcades without the involvement of Shōji Kawamori. Kawamori was uninterested in video game development at that point because he could only do 2D, but he had become interested when he learned the game was being made in 3D for the Sony Playstation.[1]

In A.D. 2047, the five member idol group "Milky Dolls", who had been scheduled to participate in the next "ZENTRADI sound project", are abducted by unknown hostile force during a U.N. Spacy commemorative ceremony. Escaping in a camouflaged spaceship, the abductors folded to the planet Elysion.

The U.N. Spacy high command then orders the VF-X Ravens and the crew of the Valhalla III to rescue the Milky Dolls and uncover the identity of the mysterious armed force. They turn out to be a rogue Zentradi militia.

A series of missions takes place in the game under "Operation Orpheus". The enemies of the VF-X Ravens are primarily rogue Zentradi forces, consisting of Battle Pods 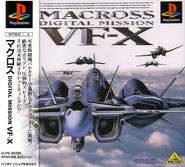 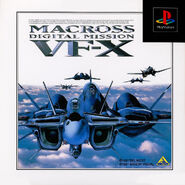 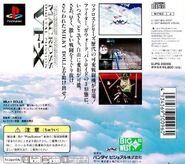 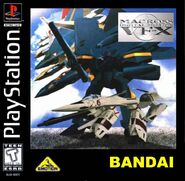 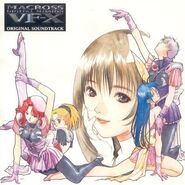 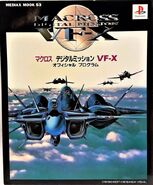 A hobby kit of the Pheyos Valkyrie, an enemy in the game.

The VF-4 figure that first appeared in this game.

Milky Dolls singing "Only You".

Milky Dolls and character guide magazine spread.
Add a photo to this gallery

The game received fairly negative reviews at the time. Gamespot is quoted saying "Macross VF-X looks elegant at times, but ultimately fails to capture the emotion, the excitement, and the sheer visual splendor of its source material.", citing how the game featured lengthy, boring missions and poor control flight mechanics, controls and physics.[2] Many others have criticized the game's horrible audio / sound effects and poor music, which utilized MIDI arrangement. These criticisms would later be rectified in its sequel, Macross VF-X2.

Retrieved from "https://macross.fandom.com/wiki/Macross_Digital_Mission_VF-X?oldid=42315"
Community content is available under CC-BY-SA unless otherwise noted.