Macross Frontier Movie: The False Songstress (劇場版 マクロスF 虚空歌姫～イツワリノウタヒメ～, Gekijō-ban Macross Frontier ~Itsuwari no Utahime~) is the theatrical retelling of the events depicted in Macross Frontier television series by 8-bit and Satelight. It was screened at Kadokawa Cineplex and Shochiku Multiplex on November 21, 2009 by Klock Worx, and featured new songs sung by May'n and Megumi Nakajima and produced by Yoko Kanno.

It was followed by Macross Frontier Movie: The Wings of Goodbye, which was released in 2011 and Macross FB7 Galaxy Flow Soul: Listen to My Song! in 2012. The Blu-ray release of the movie, Macross Frontier The Movie: The False Songstress Hybrid Pack, was released on October 7, 2010. Meanwhile, Artdink and BANDAI NAMCO Entertainment published Macross Triangle Frontier on February 3, 2011.

On June 8, 2018, a MX4D ️version was released at TOHO Cinemas theaters to celebrate the Frontier television series' tenth anniversary.

We begin with the 25th New Macross-class Colonial Fleet, dubbed the Macross Frontier, en route to the galactic center. This heavily populated interstellar emmigrant fleet contains a makeup of both human occupants and their Zentradi allies. During a mission to an unexplored asteroid belt a reconnaissance New United Nations Spacy (N.U.N.S.) VF-171 Nightmare Plus is destroyed by extremely powerful and fast insectoid biomechanical alien mecha known as the "Vajra" which immediately begin their advance against the fleet.

Life continues aboard the Frontier, its citizens unaware of the impending attack. The Galactic Fairy Sheryl Nome has arrived from the Macross Galaxy to stage a special concert, enlisting flight cadets Alto Saotome and Michael Blanc to perform aerobatic feats during her performance. Ranka Lee, an aspiring singer who works at the Nyan-Nyan restaurant, watches her idol, Sheryl, in awe as she sings Universal Bunny.

The concert is suddenly interrupted by explosions as the Vajra tear through the fleet's defenses. The Vajra, attracted to the "fold waves" transmitted by Sheryl and Ranka's voice, rampage through the inner city aboard the Frontier. Unable to stop the new enemy threat, the N.U.N.S. Colonial Defense Forces authorizes the deployment of a private military provider organization called Strategic Military Services (S.M.S.) which utilizes the new VF-25 Messiah variable fighter to combat the alien menace. The Vajra War has begun.[1]

Released in November 21, 2009, The False Songstress would have been the first Macross movie in fourteen years, following Macross Plus Movie Edition and Macross 7 the Movie: The Galaxy's Calling Me!.

A theatrical version of the Macross Frontier anime television series was announced in Japan during the broadcast of the 25th and final episode Your Sound ("Anata no Oto") on September 25, 2008. According to interviews with Shōji Kawamori, the movie was to be an adaptation of the story from the television series. He stated that "It may be the first hour of this film that follows the television series. Following the sequel, you might think that it's almost an entirely original story."[2]

Japanese anime magazine Animedia had originally announced that the film was to be released during the summer of 2009.[3][4] Other reports later placed the premiere in the fall of 2009. That report was confirmed by an itasha (vehicle decorated with character art) mini-van outside the "Macross: The Super Dimension Space Launching Ceremony" event that took place on February 22, 2009 in Japan. However, at that point, the creator Shoji Kawamori and the cast members Yuuichi Nakamura (Alto Saotome), Aya Endo (Sheryl Nome), and Megumi Nakajima (Ranka Lee) noted on the actual event, that the new date and the title were still subject to changes.

In late 2009, Kadokawa Cineplex and Shochiku Multiplex theaters' websites revealed the title and date, and the second issue of Kadokawa Shoten's Macross Ace magazine eventually published the details on June 26, 2009. The teaser trailer for the film premiered in Japanese theaters on June 27, 2009 (the same day ticket pre-sales began in Japan). The first movie retells the events of the anime from episodes 1 to 13, with significant alterations to the story and timeline of the television series.

There were thirty theaters screening the film at the time of its release. It placed ninth at the weekend movie box office on November 21st and 22nd, 2009, and saw a very limited release, which was the norm for niche animated properties at the time.[5] Two weeks after its initial screenings, the film had recorded 220,000 attendees and a final box office record earning of ¥650 million.[6] 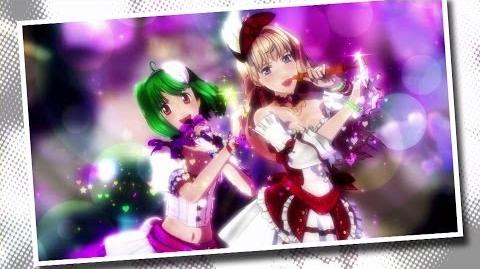 A Blu-ray release of the movie, titled Macross Frontier: The Movie – The False Songstress Hybrid Pack, was released on October 7, 2010. The Blu-ray release contains the Blu-ray jacket, the hybrid disc, a 48-page artwork booklet, a theatrical release archive, and a card featuring frames from the movie. The pack also included a code that allowed the owner to be entered into a contest to attend the Macross Frontier Christmas Live event that year. A PS3 game titled Macross Trial Frontier is included in the Hybrid Pack, playable on the PlayStation 3. A standard DVD was also released in the same day. A new Blu-ray re-release is set to come out in 2016.

Ranka Lee shocked at these developments.

False Songstress homages an iconic scene from Do You Remember Love?

Ranka trying to make it as a diva.