Macross M3 (マクロスM3, Macross M3?) is a 3-D arcade-style shooter that was released for the Sega Dreamcast. Similar to Macross Digital Mission VF-X and Macross VF-X2, players were part of the elite Dancing Skull squadron and piloted various Macross-universe mecha through a variety of story-based missions. The game spans several decades in the Macross Timeline, from A.D. 2014 to 2030, and features playable pilots such as Maximilian Jenius, Milia Fallyna Jenius, and their adopted Zentradi daughter, Moaramia Jenius. It is considered a prequel to the Macross 7 television series.

Like its Playstation predecessors, Macross M3 is mission-based 3D shooter where players chose from several playable pilots, each with their own unique variable fighter. Combat was dependent on players taking advantage of their variable fighter's three distinct modes: Fighter, GERWALK and Battroid. The final game consisted of eight stages called "episodes", and each episode consists of a handful of levels, totaling 18 playable levels.

The game is set in a previously unexplored period of the official Macross scenario (2014 and 2030). The game is noted involving series creator Shōji Kawamori, character designer Haruhiko Mikimoto, and animation director Ichiro Itano. Kawamori stated he wanted to flesh out what transpired between Maximilian Jenius and Milia Fallyna Jenius, and how the events in the game led to Macross 7. In addition, one of the big selling points of the game was the inclusion of previously unseen variable fighters, the VF-3000 Crusader and VF-9 Cutlass. Shōji Kawamori helped to refine their design.

Space War I ended with the destruction of much of the Earth's surface. Mankind and Zentradi formed a society that led to a space colonization program in 2012, hoping to preserve their species. As humanity and their new Zentradi allies expanded across the galaxy, many were convinced that they had finally entered a new era of peace.

However, not everyone was keen to join this new order. Zentradi Fundamentalists began mobilizing on several planets in the frontier section of the galaxy. Many began engaging in acts of terrorism, which terrified the population. Responding to these attacks, U.N. Spacy organized a secret military force known as the "Dancing Skull", led by ace pilots Maximilian Jenius a.k.a. "Blue Skull" and Milia Fallyna Jenius a.k.a. "Crimson Skull".

The Dancing Skull squadron were stationed aboard the cruiser Arugenikusu, allowing them full autonomy in how they carry out their confidential operations. Due to their status as a secret military group, the two ace pilots didn't expect much in terms of friendly military support. They engaged in military "dances" in the battlefield, claiming it helped their combat effectiveness. Early on, the couple captures and rehabilitates a young Zentradi named Moaramia Jifon, eventually adopting her as their daughter. Years later, she would be inducted to the Dancing Skull team, having many adventures since.

Scenes from the Macross M3 animated introduction, featuring Moaramia Jenius, along with her adoptive parents.

A scene in the Macross M3 featuring the main cast of the game. 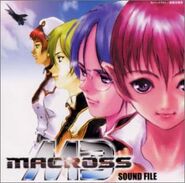 A photo of the Macross M3 Limited Edition release.

The back cover of the Macross M3 Limited Edition version.

The back cover of the Macross M3 CD jewel case.

Dreamcast Magazine with a cover story on Macross M3. 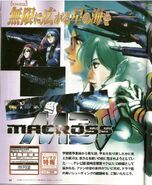 The second page of the interview with Itano.
Add a photo to this gallery

A limited edition boxed version was released, which included a laminated card and a special certification.

The game was poorly received by the professional gaming press and public due to poor control scheme and uneven difficulty. However, it was praised for its character design and the appearance of rarely seen and new mecha.

Retrieved from "https://macross.fandom.com/wiki/Macross_M3?oldid=40679"
Community content is available under CC-BY-SA unless otherwise noted.