This article needs to be cleaned up to conform to a higher standard of quality.

The Macross Quarter, is a Macross Quarter-class Variable Space Carrier that appears in the Macross Frontier television series. It is operated by the Strategic Military Services private military service.

The variable multi-purpose stealth space combat mobile aircraft carrier Macross Quarter is the operational base of the Strategic Military Services (S.M.S.) within the Macross Frontier colony fleet. Although one-quarter the size of the current Macross Class warships (being equivalent to a 400m-class vessel typical of regular carriers) the Macross Quarter can transform from a warship (cruiser mode) to storm-attacker mode (battle mode) for close-combat. The Macross Quarter boasts the mobility and combat performance of a fighter even though it is the size of mid-scale warships.

The Macross Quarter is a compound vessel consisting of five warships. The central hull consists of the main body and legs. The forward port side aircraft carrier is designated ARMD-L while the starboard side gunship is designated ARMD-R. The rear starboard-side mobile battery warship is BASTER-R and the rear port side mobile battery warship is BASTER-L. These design mechanisms were aimed at simplifying the transformation. Since each unit carries its own reaction engine and fold engine they can be deployed as independent warships or a fleet. The Macross Quarter has the capabilities of an aircraft carrier/amphibious assault ship, close-quarter combat capabilities through transformation to storm attack mode and can carry a maximum of 80 variable fighters and Destroids. The Gatling-type buster cannon - which can be used as a Heavy Quantum Reaction gun - is suitable for heavy anti-ship combat. In addition to a high output reaction engine cluster, the Macross Quarter has the overall performance worthy of the "Macross" name despite being within the small, 400m-class of carriers.

The Macross Frontier fleet's Yaesu Heavy Industries and the L.A.I. Corporation took charge of design and construction of a concept for a "relatively small and excellent maneuverability variable attack space aircraft carrier". The Macross Quarter was built in Macross Frontier's dock and when handed over to the S.M.S. upon completion, it was moored to a special pier on Island 1's port side. The vessel functioned as a central command and graveyard facility of S.M.S. Originally the Macross Quarter was registered as a "Special Duty Operation Warship" and when incorporated into the New UN Spacy it became designated "Small Mobile Combat Aircraft Carrier". At the request of the Executive Office of the President and with permission of the New UN military headquarters, the Macross Quarter sortied for the Macross Galaxy Rescue Operation on 1 May 2059. Thereafter, the ship was deployed for anti-Vajra combat following a complete overhaul of the radar system. 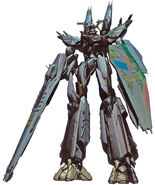 Retrieved from "https://macross.fandom.com/wiki/Macross_Quarter?oldid=37536"
Community content is available under CC-BY-SA unless otherwise noted.