Macross The Ride (マクロス・ザ・ライド, Makurosu Za Raido?), also known as Macross R, is a light novel written by Ukyō Kodachi and commissioned by Dengeki Hobby Magazine by ASCII Media Works. The plot is set in an air race competition performed by Valkyries. A total of twelve issues were serialized from the January to the December 2011 on Dengeki Hobby Magazine. Dengeki published the first volume of the novel's collected edition on February 6, 2011, and the second on December 2011. Two Macross The Ride Visual Guides were also released in 2011.

The author also worked on novelizations for Macross Frontier, Macross 30: The Voice that Connects the Galaxy and Macross Δ, which was called Macross Δ: Girl of Al Shahal.

Macross The Ride was spinoff project based on the Macross series that featured a high-stakes Valkyrie racing competition called "Vanquish". The Japanese hobby magazine, Dengeki Hobby Magazine, published photographs of finished Hasegawa plastic model kits and excerpts from the novel, with the text of the novel later serialized on the official Dengeki Hobby website. However, only the first and the last three episodes could be viewed on the web. These web novels were updated on the 25th each month, featuring revisions from the original printed text found on the magazine.

Several tie-in merchandise were produced, including several plastic model kits made in collaboration between Dengeki Hobby Magazine and Hasegawa. Limited 1/72 production models for the VF-11D Thunder Focus and VF-11B Notion II were released in late 2011.[1] In addition, a contest "Macross The Ride Competition" was also held to recruit hobby model makers to produce custom airframes based on The Ride Valkyrie designs that were modified from original Hasegawa plastic models.

In A.D. 2058, a no-holds-barred "Vanquish" air race is held aboard one of the Island ships of the 25th Super Long Distance Emmigrant Fleet Macross Frontier. Valkyries old and new are restored, and pilots regardless of race, religion and political affiliation enter, all vying to take the top prize in what would be called the "Age of Galactic Discovery" air race. The light novel follows Chelsea Scarlett, a Zentradi former rock singer turned S.M.S. pilot under Apollo Squadron, who joins the Vanquish race piloting her custom VF-11B Nothung II and VF-19ACTIVE Nothung. She befriends the onboard AI "Brünnhilde" who helps her throughout the series.

While the six chapters focus on the Vanquish races, the second half of the story, the racing stage moves to the Macross Galaxy, on the resort ship Evena, where top racers participate in Vanquish's most prestigious event, the "Star of Heaven Cup" or "Seiten Cup". However, the race is interrupted by an attack by a mysterious paramilitary force known as the Fasces, (who turn out to be a surviving splinter group of Latence). Soon, many Vanquish racers volunteer to fend off these would-be invaders. Chelsea is captured by Naresuan, the leader of Fasces who hopes to use her singing voice to reactivate a long dormant Protodeviln weapons factory satellite that was discovered during the Protodeviln War.

A combined force of S.M.S. and Vanquish racers form an air corps to rescue Chelsea and stop Naresuan and his forces. The battle rages as they face fierce resistance against Fasces and the infinite production capacity of the possessed factory satellite. Chelsea manages to free herself, and transfer her AI companion "Brünnhilde" to a refurbished YF-25 Prophecy and sings a prayer song in Zentradi to calm the soul of the Protodeviln. Fasces forces eventually surrender and with the battle over, Chelsea finally realizes she wishes pursue singing to connect to her Zentradi heritage.

For the first time in Macross series' history, the main protagonist is a female singer and a pilot.

On Dengeki Hobby Magazine's issue for January 2011, Macross The Ride author Ukyō Kodachi is quoted during an interview saying:

"I was one of the great many fans from the generation around the time of Super Dimensional Fortress Macross, Macross Plus and Macross 7. With the excitement savored at that time and the thrilling feeling of these novelizations planned to work together with the model making in model magazines that were read in the same period, I am now astonished that I am on the side that's telling the stories.

This time's Macross the Ride, even though air races are used as the setting, an ethnic-identity (racial self) theme is also a part of the basis of the story. While layering on the generations, Earthlings and Zentradi cooperate together in a voyage in the vast universe in a large-scale city fleet... In order to depict that, I considered the extreme air race "Vanquish" which used Valkyries.

Even though air races that use Valkyries is a setting that also received support from Supervisor Kawamori, there is also pressure just from his support (laugh). Of course, "song", which cannot be removed from Macross, has also been incorporated. Well, similarly to a space emigrant fleet, even though this may be a lengthy journey from here, receiving your fellowship in this serialization would be greatly appreciated."[2] 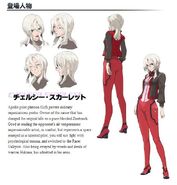 Chelsea Scarlett and her Valkyrie.

Another spread from the Macross R Visual Guide.

Hasegawa kit for the VF-11D Thunder Focus.
Add a photo to this gallery

Retrieved from "https://macross.fandom.com/wiki/Macross_The_Ride?oldid=38493"
Community content is available under CC-BY-SA unless otherwise noted.