It is a separate series from Macross Modelers, which primarily focuses on hobby kits and figures.

Macross Won’t Stop is a web series hosted by Minori Suzuki (Freyja Wion), Nao Tōyama (Reina Prowler) and KENN (Bogue Con-Vaart) and streamed on SHOWROOM (which is owned by DeNA, creators of Uta Macross Sma-Pho De-Culture). It began airing during the 11th episode of Macross Δ television broadcast on June 12, 2016. The web series has an "anything goes" format, where the hosts discuss all things Macross, such as new events, merchandise, character birthdays and games. The hosts regularly hold up illustrations of the characters they play during the stream.

The show also has special guest stars, such as the rest of the members of Walküre, Megumi Nakajima, Hidetaka Tenjin and even Shōji Kawamori.

KENN, who played Bogue Con-Vaart, stares deeply into the camera.

All members of Walküre make a surprise appearance in the November 2018 episode.

Shōji Kawamori stopping by the show with his Lynn Minmay shirt. 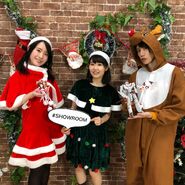 The hosts dress for the holidays.

Merchandise for the series, featuring Bogue Con-Vaart and Walküre.

Art featuring Bogue, Freyja and Ranka Lee.
Add a photo to this gallery

Retrieved from "https://macross.fandom.com/wiki/Macross_Won%E2%80%99t_Stop?oldid=42730"
Community content is available under CC-BY-SA unless otherwise noted.