Mao Nome (マオ・ノーム, Mao Nomu?) is one of the main characters in the Macross Zero OVA. She also makes an appearance in the Macross Frontier television series. She is the younger sister of the village priestess, Sara Nome. She would later be the grandmother of Sheryl Nome.

Mao is a cheerful and hyperactive girl, a stark contrast to her older sister, Sara Nome. She is fascinated by modern technology, and dreams of seeing civilization beyond her home of the Mayan Island. The island tribal leader, Nutouk, finds her curiosity amusing, but realizes that it is merely a sign of the times as more of their young people also share that same fascination.

Mao is smitten when she first meets Shin Kudō, and is amazed at how adept he was at working with technology, to the chagrin of her sister. This interest in technology would carry over throughout her life, as she became one of the head researchers aboard the 117th Long Distance Research Fleet.

She is a pretty good swimmer, likening herself to a "Bird Human" to Shin.

Mao is a carefree child who had always been fascinated with modern technology. Though she has sufficient knowledge of Mayan Island customs, she longs to leave someday, curious about the sights and sounds of the modern world. She meets the stranded pilot Shin Kudō, and is taken by his utter nonchalance at living in modern civilization. Her sister, Sara Nome, the village priestess, disapproves of her sister's interest in the man, but is unable to dissuade her from pursuing a relationship with him. When Shin fixes the village's old generator and power is restored to the island, she listens to an old radio and dreams of what life must be like in the city. This worries her sister once again, seeing technology as the harbinger of their doom.

One day, she takes Shin out to the ocean to show her a treasure she had found underwater. The take a moment to admire the flying fish as it moves past their boat. They then take a dive and Shin discovers it is one of the missing fragments of the "Bird Human" that the United Nations Military had been looking for. They are ambushed by Anti-U.N. submarine, and Mao is left in a catatonic infant-like state. She is rescued by Edgar LaSalle while Shin proceeds to take out the incoming enemy forces. Mao's regressive state worries their village elder, Nutouk, who calls upon his people to pray over her.[1]

By the time Mao recovers from her trauma, the final battle had begun against the "Bird Human". The vessel had possessed her sister Sara, inducing her to sing the "Song of Destruction", signalling the end of the world. Mao attempts to communicate with her sister, to no avail. She then uses her mystical powers to contact Shin to dissuade Sara from causing further destruction. Shin and Sara make contact, and for a moment, the spell is broken. However, Mao witnesses a HWR-00 Monster fire upon the "Bird Human", causing it to leave the galaxy. As Shin's Valkyrie falls to the Earth, he hears Mao and the villagers song and, recalling their moment seeing the flying fish, is suddenly transformed into a "Bird Human" himself. Shin finally leaves Earth to join Sara.[2]

While Dr. Mao does not appear formally in Macross Frontier beyond a cameo, she did become one of the pioneering researchers of the Protoculture. She was also the key scientists researching the miraculous substance known as Fold Quartz, and was aboard the Macross Galaxy during various archeological expeditions. Dr. Mao also authored a thesis on this subject. In 2048, she, along with Ranshe Mei and Grace O'Connor, accompanied the 117th Research Fleet which had been sponsored by the Critical Path Corporation to research the Vajra and the V-Type Virus, possibly find a cure.[3] The fleet was suddenly attacked by the Vajra, summoned by the singing of Ranka Lee. Dr. Mao was killed during the attack.[4]

She was later identified as Sheryl Nome's grandmother after a letter addressed to her was found in one of the ruined ships of the ill-fated fleet. Sheryl's treasured fold quartz earrings once belonged to her.

Shin Kudō
She develops a crush on Shin as she sees him as a symbol of modernity.

Sara Nome
Her older sister. She sees her as stuck-up, traditional and too self-serious.

Mao hanging on a coconut tree in a magazine spread.

A magazine spread with Mao Nome as a bridesmaid for Sara Nome's fantasy wedding.

Mao and her sister, Sara Nome's shrine to their family.

Mao is fascinated by technology, and is seen here listening to the radio while knitting.

Shin and Mao after their underwater kiss.

Mao staring at the sky, seeing Shin attempt to rescue her sister, who had become possessed by the "Bird Human".

Mao stares as the Bird Human awakens moments after seeing Shin off. 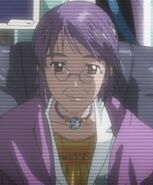 Ranka Lee playing Mao Nome in a film adaptation.
Add a photo to this gallery

Retrieved from "https://macross.fandom.com/wiki/Mao_Nome?oldid=42268"
Community content is available under CC-BY-SA unless otherwise noted.