Maximilian Jenius (マクシミリアン・ジーナス, Makushimirian Jīnasu?), commonly called by his moniker Max (マクス, Makusu?), is a character that appears in the Super Dimension Fortress Macross, the movie The Super Dimension Fortress Macross: Do You Remember Love? and Macross 7 as well as other related specials, including the spinoff manga series, Macross 7: Trash. He was also the founder of the Dancing Skull team in the Macross M3 video game for the Sega Dreamcast.

An ace pilot of the U.N. Spacy, he has handled a number of Variable Fighters during Space War I. Max also played a critical role in history as his marriage with rival ace pilot and defector Milia Fallyna Jenius was the first step in building lasting relations between humans and Zentradi. He became captain of Battle 7 several years later.

Max is typically a reserved person, but also a perfect gentleman. Though his skill shines in combat, he hardly brags about it. In fact, he doesn't realize that he's a genius until his wingmen pointed it out to him directly. His cool good looks makes him the envy of some, and the crush of many who encounter him.

Although Max is not above an occasional egotistical musing when he is off duty, he is also well known for his affable and courteous personality to which comrades hold him in high favor.

Military protocol is everything to Max. During a sortie, he obeys all orders without question. There are times however that he takes them a little too literally, like one in particular that involved "not wasting ammo". Max does so by making majority of his shots hit.

Max also cares deeply for his wingmen and often goes out of his way to get them out of a tight spot.

Max is an esteemed ace pilot who would later be promoted as Captain of his own fleet. Beneath his soft-spoken persona lies a highly-skilled warrior.

At first, Max's flight experience was limited to air shows and simulator training, but upon finally seeing real combat as part of the Vermillion Flight, he utilizes an unconventional but effective use of the Variable Fighter, making use of its different forms to quickly intercept enemies as opposed to engaging them in aerial dogfights. Max especially favors the Battroid mode for multi-angle shooting, exhibiting a significant degree of skill in marksmanship.

His style also works well in flight-sim arcade games, as he can win with ease in two-player matches and clean out medals on any machine in just one sitting.

As a captain in 2045, the experiences he had over the years made him develop a sort of "sixth-sense" of the enemy fleet's next move, which Exsedol Folmo calls "Genius Intuition". Though it usually gives him a tactical edge, it is far from infallible.

Combat skills aside, Max is also a good cook. He has a large repertoire of recipes, boasting that he can meet any request when preparing for parties.

Max Jenius was born in an unspecified part of Europe. Like Hikaru, he also started his career as a fighter pilot at the young age of 16. By the time he had been assigned to Hikaru's Vermillion Flight, he had achieved the rank of Corporal, a skill ranking of A, amassed 320 hours in simulator time and 50 hours flight time [1]. Though initially lacking in combat experience, Max shows an uncanny talent of using the Variable Fighter effectively, both in terms of fully utilizing the unit's different forms and weapons.

Max's exploits were not limited to kill counts: When they were captured by the Zentradi during a recon mission, he employed the use of stealth and disguise by outfitting his Valkyrie with a Zentradi soldier's uniform, thus becoming a key factor in the team's survival and eventual escape.

Max also displayed a streak of hopeless romanticism which was especially evident when he first encountered his future wife, Millia Fallyna. He acts like a gentleman to all the women he encounters, but Milia was the only one that he described as "just his type".

In their duels as sworn enemies, Max soundly defeats Milia not just once, but three times. First in their respective mechas, next in an arcade game face-off and finally in a knife-fight to the death in the park. Immediately after the last duel, Max declines Milia's request to finish her off and instead proposes to her.

Their marriage was celebrated by the whole Macross crew, with Captain Bruno J. Global even arranging to televise the ceremony and reception since their union marks the first one in history between a human and Zentradi. The captain believes that this will eventually pave the way to peaceful coexistence between the two warring sides.

Milia is afterwards allowed to join the mainline fighting forces of the SDF-1 Macross and becomes Max's wingmate on duty, piloting a distinctive red Valkyrie alongside Max's blue one. As per Milia's request, Max no longer aims at an opposing Zentradi unit's critical points if he can help it, instead targeting the weapons, unit extremities and propulsion systems with the express purpose of disarmament and to make them lose the will to fight.

After the Zentradi Fleet under Golg Boddole Zer is vanquished, Max and Milia settle down in the new city built around the SDF-1 Macross and start a new life together. In March 2011, they have one daughter named Komilia Maria Fallyna Jenius. The name Komilia (which means "Little Milia") was chosen because with her green hair and green eyes, she looks so much like her mother. Max, despite his relatively young age, proves to be a good father, although he clearly doesn't like it when the child plays with his hair.

Max and his family play a crucial role in the U.N. Spacy's capture of a Zentradi factory satellite in November 2011. After blasting their way into the enemy command ship, Max and Milia proudly display their child, cradled in Milia's arms and wearing a tiny pink and white spacesuit to the hostile Zentradi. Max smiles as Milia explains that Komilia "was created by the two of us...". The Zentradi, who have had no exposure to human culture and have never seen a baby before, become terrified of Komilia and flee in fear, causing chaos and disorder throughout the enemy fleet.

Max and Milia eventually have more children and also adopt a Zentradi girl over a period of twenty years from 2011 to 2031.

In The Super Dimension Fortress Macross: Do You Remember Love? film, Max is promoted to leader of the Skull Squadron following Roy Focker's death, thus having Hikaru Ichijyo and Hayao Kakizaki briefly as his subordinates in one sortie.

Max and Milia also met in a completely different way. After the Macross returns to Earth, the Meltrandi, under the command of Lap Lamiz, launched their own campaign against the Macross. The Meltrandi fleet sends in their highly trained Queadluun-Rau power armor fighters, led by their ace pilot, Milia Fallyna, to retrieve a Protoculture tablet containing an ancient song they believed could help them defeat their Zentradi enemies. In the ensuing skirmish that subsequently led to Hayao Kakizaki's demise, Max and Milia have a heated duel. In the latter part of the battle, Max pursues Milia into Lap Lamiz's ship and after a tense confrontation in a dark corridor, Max manages to down his opponent. Upon breaching the armor, Max expresses his awe at the Meltran pilot. Milia is confused at first, but they both become enamored with one another.

Since that time, Max has not been able to return to the SDF-1 and was considered MIA. In his absence, Hikaru assumed the role of Skull Leader.

In the final battle between Boddole Zer and the Macross fleet, a macronized Max is seen with Milia battling together in their respective specialized blue and red Queadluun-Rau. This is one of the few scenes showing Max without his glasses.

Prior to its deployment, Max is appointed commander of the 7th Macross Fleet and captain of the flagship Battle 7, with a de-micronized Exsedol Folmo as his advisor. Max's relationship with Milia became strained somewhere along the line, though he is still in constant contact with her due to her position as mayor of City 7.

Max and Milia, in addition to being officially (but not publicly) divorced from each other, are also separated from almost all of their children except for their youngest daughter Mylene. As the series progresses, Max becomes responsible for the establishment of "Sound Force", a trio of Valkyries piloted by the members of the band Fire Bomber of which Mylene was a part of.

Due to Max's protective nature, he initially forbids Mylene from joining Sound Force because of the possible risks involved, but was eventually persuaded after witnessing her skill both as a pilot and musician. Max often clashes with Milia over this, but the two are somehow able to remain civil around each other for Mylene's sake.

Late in the series, Max and Milia are able to overcome their troubled past and resume flying together in their distinctive blue and red VF-22 Sturmvogel IIs in order to save the fleet from threat posed by the Protodeviln. In the final battle, Max, Milia and Mylene fight side-by-side against Geperuniti.

Some time after the battle against the Protodeviln, Max retired from the military and opened a flying school called "Jenius Air". This had a significant influence on his granddaughter Mirage Farina Jenius, who eventually became a fighter pilot herself.

Max's role in history was briefly told by Mirage to Hayate Immelman and Freyja Wion after The Windermere Kingdom declared war on New United Nations Spacy, believing that conflict can be averted if individuals from the two warring sides are united by mutual understanding.[2]

In Delta Mini-Theater, it's implied that he once requested Mirage to get him the autographs of all the Walküre members.

Max was also mentioned by Ernest Johnson in a latter segment of the same feature, the legendary pilot having encountered Ernest's father back in Space War I. This is presumably around the time he got married to Milia and started to shoot only to cripple hostile units.

Between 2011 and 2031, Max and Milia have eight daughters (seven biological, one adopted). The names of the 8 children, and their birth dates, are:

Max in his pilot suit from DYRL.

Max on his way to greet Hikaru after he got out of being stranded with Minmay.

Milia with Max, both in Macronized form.

Max as seen on Macross M3

Max giving Milia a sheepish smile before they perform a kiss for "Culture Shock" purposes. From Macross 7 Encore. 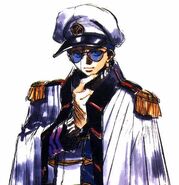 Image of Max & Milia's first meeting in Macross Delta while Mirage talks about her family history. This is based on the scene from "Do You Remember Love".

Retrieved from "https://macross.fandom.com/wiki/Maximilian_Jenius?oldid=42174"
Community content is available under CC-BY-SA unless otherwise noted.