Mercats (海ネコ, Umineko) are amphibious cat / fish hybrid mammals seen in the Macross Δ television series and its theatrical adaptation, Macross Δ Movie: Passionate Walküre. They are named as such due to their upper body being a cat and their lower body being similar to a fish or seal. They are incredibly adept at swimming which helps them evade predators.

Mercats are an integral part of Planet Ragna's ecology, being known for pest extermination. They are often kept as pets by many of the locals, as seen with Q-Lulu, a unique striped Mercat owned by Mirage Farina Jenius. Further evidence of their popularity shows in various pieces of Mercat-themed merchandise like mobile phones, plush dolls, among others.

Many stray Mercats are seen as pests, like Don, a mischievous Mercat who steals food from people like Chuck Mustang. Certain individuals like main character Hayate Immelman can also catch allergies from exposure to Mercats.

A couple of Mercats. 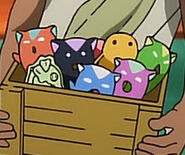