Mikumo Guynemer (美雲・ギンヌメール, Mikumo Ginnumēru?), also known as the Mysterious Venus, is a character from the Macross Δ television series and its theatrical adaptation, Macross Δ Movie: Passionate Walküre. She is the center of Walküre.

Mikumo is a mysterious beauty, a fact that has earned her the nickname, the "Mysterious Venus". She has long slightly flowy ankle length violet hair with pastel blue highlights, that sometimes is shown as a gradient from the top to the bottom. Her hair is styled as a hime cut, a fluffy bun on top of her head, a section of curled hair on her left shoulder & her the bottom ends of her hair is sectioned into four sections. She decorates her hair with a with a dark violet flower, teal feather like detail and a tan beige decor on the bottom hair accessory.

A Walküre concert outfit she sometimes wears is a cropped white button up collared shirt, revealing the right side of her midriff, as a base & waist length yellow tie. It's layered with an asymmetrical up rounded blue jacket lapel with small white stripes along with a little pocket on the left side & yellow buttons on the left side. On the right arm, she has ruffled sleeves. The first layer is white & the second layer is indigo-violet. For the left arm is a slightly puffed long white open shoulder sleeve attached to a blue cuff with yellow buttons on the side. For the right arm is a blue cuff type bracelet with white ruffle edge on the top & yellow buttons on the side.

The skirt is asymmetrical from right to left, in opposite contrast to the top. The right side is a low high blue material with small white stripes & the left side is a flowy gray pleated skirt & the second layer of the skirt is navy blue, secured with a black belt with a simple gold buckle. Paired with black thigh high boots with yellow ribbons.

She wears a standard Delta Flight uniform whose thematic colors are mainly white, navy blue and red. She wears a white collared top secured a red triangular shaped button. It has a very tiny keyhole that reveals a slight portion of her collarbones with navy blue lining to the top her waist & splits into 2 V shape with navy blue lining. The middle part of her torso of her top is navy blue with small upside down red triangles on the top. There is a slight lining in the middle that separates into 2 V shape pattern & some dark trapezoid-like lining on both sides of her bust.

It also has navy blue puff sleeves with red lining. She wears a white pleated skirt with a thin navy violet stripe at the bottom. Along with this, she wears a dark blue ankle strap heel with gold design in the middle & a white, slightly puffed material is diagonally across it. She wears a similar design on her right foot, but it's a pump rather than ankle strapped. In Episode 1 she wore a cream off white ankle length dress with a thick slightly lined material & is faintly darker at the top, over this outfit as a disguise. Paired with a puffed white cap, that's the same colour of her dress. Mikumo carries a small burgundy pouch around her hips. Her hair is sea marine green with turquoise highlights, rather than the usual violet-light blue combo. She stylises it in a low fishtail ponytail, decorated with a ultramarine & oxblood kanzashi.

Along with the others in 7th episode, Mikumo disguised herself it make her blend in with the Volderians. She had indigo eyeshadow & cat ears to cover up her real ears with some beige fur in them. Mikumo had wave like purple markings in place of the whiskers. Her Voldorian attire was a sleeveless lavender top that had a opal thick material on the horizontal neckline. It splits off to two parts with a opal stripe with fringes at the bottom. Along with this, she has a long wrap skirt that has a opal stripe with a folded design on the right side. It's secured by a purple thick belt with a simple good buckle & brown flats with 2 straps on her left foot, and only one on the right. Mikumo also had on a dark blue hood on as well.

Mikumo, as her nickname suggests, is an enigma, even to her fellow idols at Walküre. She doesn't sleep in the Walküre dormitory, choosing to swim alone at night among the jellyfish of Ragna. Despite her seemingly calm nature, she is demanding and stern, particularly to newcomer Freyja Wion whom she holds to a very high standards. Mikumo enjoys drinking a glass of milk after dance rehearsals.

She works exclusively alone during spying missions, giving her the reputation of being a "lone wolf queen". She utilizes cicada shaped micro-drones equipped with sensors and cameras, and a communicator device hidden in her right thumb nail. During the series, she ditches Mirage several times during an investigation, stating she can't go undercover with anyone around. Mikumo goes so far as to never answering any of Mirage's calls even during critical situations.

Mikumo becomes very interested in Heinz Windermere's Song of the Wind, unable to comprehend her fascination with the song and its meaning.

In the ninth episode, Mikumo agreed to keep quiet of Messer's worsening Var condition from the others, on the condition of giving her his data regularly.

In the 19th episode, it's revealed that Mikumo was an artificially created life by Lady M to harness the power of Song. This revelation makes everyone in Walküre uneasy, and a prime target of Roid Brehm and the forces of the Windermere Kingdom.

In the 24th episode, it is revealed that Mikumo is a clone of the Star Singer, a powerful Windermere priestess created by the Protoculture. When she is captured, she is put under a spell by Roid when she hears the words, "Rudanjal Rom Mayan". She is brainwashed into singing The Song of Stars, an ancient song that, when powered by the Protoculture relays, can manipulate people's consciousness. It is only through Hayate Immelman and Freyja Wion's love that Mikumo's will is freed.

Freyja Wion
She's constantly catty towards her from the beginning, but deep down wants her to be the best and succeed.

Heinz Nehrich Windermere
She sees through him and begins questioning why she was created to sing.

Roid Brehm
Roid fetishizes capturing Mikumo and converting her to the Star Singer to further his plans.

The Mysterious Venus relaxing by the beaches of Ragna in a promotional magazine spread.

Mikumo featured on a promotional spread, along with Freyja Wion and Keith Aero Windermere during the second cour of the series. 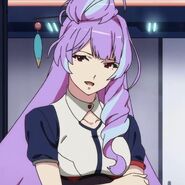 Mikumo in her Delta uniform giving a snide remark about Freyja Wion.

Mikumo in disguise at Al Shahal.

Mikumo reporting in with her special fingernail communication device.

Mikumo flashing an "S" during the S.O.S. portion of "Welcome to Walküre World". 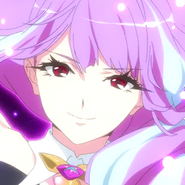 Mikumo disguising herself as a real-life Valkyrie.

Mikumo bouncing up and down during the performance for Fukakuteisei☆COSMIC MOVEMENT.

Mikumo being birthed in a vat, care of the Epsilon Foundation.

The fabulous Mikumo in the all-CG concert in the film Macross Δ Movie: Passionate Walküre.

Mikumo and her friends telling everyone to visit Tokyo's Sky Tree.

Mikumo ready to kick Vár out of Al Shahal in Uta Macross.

Mikumo staring at a star in Uta Macross.

Mikumo singing like no other with that star for Uta Macross.

The fabulous Mikumo in Uta Macross. 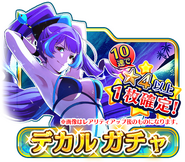 Mikumo in her signature bikini, having a bit of stretch on Uta Macross. 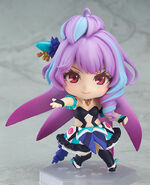 A Nendoroid Co-De figure of Mikumo.

Retrieved from "https://macross.fandom.com/wiki/Mikumo_Guynemer?oldid=38820"
Community content is available under CC-BY-SA unless otherwise noted.