Like a lot of Zentradi initially, ace pilot Milia is a proud warrior. Because of this, she is devastated when Max defeats her during a battle. She tries to regain her honor by hunting him down. After falling in love with Max and defecting to the U.N. Spacy, she still remains a strong-willed woman.

Milia is a formidable pilot. During Space War I, she piloted a Queadluun-Rau and showed little to no mercy and brutally slaughtered her foes without remorse.

To regain honor and pride, she was micronized and infiltrated the SDF-1. She encountered Max Jenius at an arcade playing a two-player Valkyrie combat game. Milia identifies Max as the man who managed to defeat her based on the fact he displayed formidable skills when she was also beaten by him at the arcade game.

She fell in love with him, becoming one of the first Zentradi to defect to the humans. She and Max married and started a family together. (SDFM: "Pineapple Salad", "Virgin Road"")

In the Do You Remember Love? movie that chronicled the events of Space War I, Milia was depicted as the Meltran ace pilot, Milia 639. She engaged Max in battle and fell down after he shot her. Max said the word "beautiful". To her confusion, she responded by asking "beautiful?". After Minmay sang the song Do You Remember Love?, the Humans, Meltrandi and Zentradi all attacked Golg Boddole Zer's fleet and thus Milia fought along side her newfound love, Max [1].

She became the mayor of the City 7 while her husband became captain of the Battle 7.

After her humiliation, Milia seeks revenge on whoever it was that did so. She realizes that it is Max after he beats her at an arcade. Both being ace pilots, the crowd gather around. Max insists she gives something in return for losing; saying she doesn't have a phone, she invites him to the park. Max dodges as she attempts to stab him, Milia cries and they fall in love. They were the first inter-species couple in history. Even worse, their species were at war with each other at the time. Nevertheless, they married & showed everyone how earthlings & Zentradi can live together in peace. The marriage of Max and Milia was one of the first steps towards peace between the humans and the Zentradi.

Lap Lamiz was her commanding officer [2] 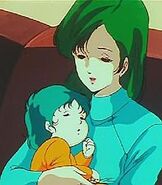 How Mirage imagined her grandparents' encounter. 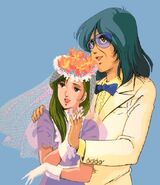 Retrieved from "https://macross.fandom.com/wiki/Milia_Fallyna_Jenius?oldid=42727"
Community content is available under CC-BY-SA unless otherwise noted.