Milky Dolls (ミルキードールズ, Mirukī Dōruzu) is a musical idol group from Macross Digital Mission VF-X. It is the first of its type for the Macross series, and would subsequently be updated with Walküre from the Macross Δ television series.

The Milky Dolls are an idol group that the "hero" character in the game Macross Digital Mission VF-X rescues from a rogue Zentradi faction. Their character designs are by Haruhiko Mikimoto and one of their songs, "Only You" lyrics and compositions were handled by Mari Iijima and arranged by Nobuyuki Shimizu. Meanwhile, the game's ending theme, "Rainbow Palette" is by Hiroshi and Nobuyuki Shimizu. 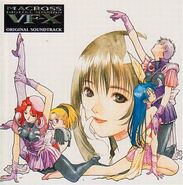 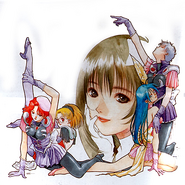 Members of the Milky Dolls, as see on the Macross Digital Mission VF-X Official Program.

Milky Dolls performing live during the game's finale.
Add a photo to this gallery

Retrieved from "https://macross.fandom.com/wiki/Milky_Dolls?oldid=39157"
Community content is available under CC-BY-SA unless otherwise noted.