Macross 30: The Voice that Connects the Galaxy
Macross Δ Scramble

Mina Forte (ミーナ・フォルテ, Mina Forte) is the one of the main heroines in the Macross 30: The Voice that Connects the Galaxy video game.

Despite suffering from memory loss, Mina is not fixated on recovering quick. She lives for the present and does her best in whatever she does, getting visibly disappointed if she thinks that she failed to live up to things expected of her.

Mina volunteered to be a pilot after being admitted to Strategic Military Services (S.M.S.) Ouroboros Branch, as she felt it was the best way to show gratitude for the people who took her in. Never in her wildest dreams did she imagine becoming a singer.

Though she is not aware of the full extent, Mina's voice is a trigger to the Protoculture ruins in Uroburos and has control over time and space to a certain degree, calling all the famous singers and pilots from decades past.

Mina's piloting skill is average at best, having only recently learned the ropes from Leon Sakaki and Aisha Blanchette. The VF-11B Thunderbolt is a perfect fit for her and she finds it easy to use.

Mina was found in suspended animation inside one of the underground Protoculture ruins in Ouroboros by Aisha Blanchette. Upon awakening, she reveals that she has no memory of who she is, other than her name. Leon Sakaki "adopts" the amnesiac girl, as she reminds her of his long dead sister, Mia Sakaki. The two go shopping in Vrlitwhai City where Mina hears Sheryl Nome's song being broadcast for the first time. She rushes to buy her CD, and vows to become a singer like her. She would soon be become a member of the S.M.S. Ouroboros Branch and given her own (replica) VF-11B Thunderbolt with a light-blue color scheme. She is assigned to help Leon recover key items and parts in their quest to uncover the mysteries of Ouroboros, and hopefully recover her memory as well.

However, it is later revealed that the ancient technology reacts to Mina's singing, so she may hold the key not only to ward off the Fold Fault phenomenon known as the "Ouroboros Aurora", but to solve the mystery of all the other ruins around the planet.

Leon Sakaki
Mina sees Leon as somewhat of a brother, and also a teacher when it comes to piloting variable fighters. It can possibly develop into a romantic relationship.

Aisha Blanchette
Mina sees Aisha as a big sister, and after being inducted into S.M.S. Ouroboros Branch, also a boss. They will inevitably become rivals for Leon's affection.

Sheryl Nome
The first diva Mina meets during the game. She became a big fan after hearing Sheryl's song "Iteza☆Gogo Kuji Don't be late" while walking around Vrlitwhai City. Shortly after that, Mina decided to make her debut as a singer. 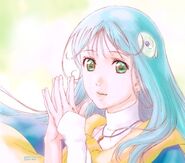 Mina having a chat with her friend, Leon Sakaki.

Mina ready to take the stage.

A plastic stand of Mina Forte.
Add a photo to this gallery

Retrieved from "https://macross.fandom.com/wiki/Mina_Forte?oldid=39911"
Community content is available under CC-BY-SA unless otherwise noted.