Mirage Farina Jenius (ミラージュ・ファリーナ・ジーナス, Mirage Farina Jenius) is one of the main characters of the Macross Δ television series, and is of mixed Human-Zentradi descent. Mirage once served as a pilot for the New United Nations Spacy before being recruited by Arad Mölders to become a member of Delta Flight. She has a pet Mercat named Q-Lulu. She is featured prominently in Delta Mini-Theater.

Mirage Jenius is prideful and overly-serious pilot, often choosing duty over leisure. This naturally which clashes with her more happy-go-lucky colleagues at Chaos. She finds solace when playing and walking her pet Mercat Q-Lulu and writing in her diary.

Mirage comes from a prominent lineage - she is the daughter of Miranda Jenius, the niece of Mylene Flare Jenius from Macross 7, and granddaughter of Max and Milia Jenius from the first Macross series. Because of this, she constantly faces the pressure of living up to the reputation of her legendary relatives.

When Hayate Immelman becomes a member of Delta Flight, Mirage is assigned as his training officer, much to her dismay. At first, they clashed due to differing opinions and piloting styles, but they later reached a point where they can support each other in the battlefield effectively. In the Macross Δ television series, Mirage started developing feelings for Hayate, culminating with her getting jealous when she witnesses his blossoming relationship with Freyja Wion. Despite this, the two do form a bond together, and Hayate helps Mirage understand why she loves to fly. This love triangle is ultimately dropped in Macross Δ Movie: Passionate Walküre, where their relationship remained platonic throughout the film.

During the beginning of the series, Mirage's piloting skills are above-average at best, nowhere near the proficiency of her famous aunt and grandparents. This was evident when she fails to perfectly synchronize with the rest of her teammates during a live performance alongside Walküre.

As Messer Ihlefeld points out, her flying style is manual-grade and predictable. She is paired with Hayate Immelman and the two initially couldn't get along. As the pair learn to work and develop a bond together, their abilities vastly improve and by the end, their attacks fully synchronize.

On 2067, Mirage is stationed on Ragna as part of Third Fleet of Chaos Ragna Delta Flight. They are sent to the planet Al Shahal for a routine patrol mission, and Mirage is assigned to the ground pending further orders. She encounters Hayate Immelman and Freyja Wion fleeing local authorities at the docks of Shahal City, and pursues them to an alleyway. She mistakenly subdues Hayate, thinking he was assaulting Freyja, and immediately apologizes. A scramble alert is sounded when a Var Syndrome outbreak spreads among the local Zentradi military forces. Mirage boards her VF-31C, and joins the rest of Delta Flight and Walküre in battle. The Aerial Knights suddenly fold in and take out Al Shahal's planetary defenses, and proceed to engage Delta Flight and Walküre members. The situation is complicated when Hayate boards a VF-171 Nightmare Plus to save Freyja from a rogue Zentradi. The battle ends with the Aerial Knights retreating, and Mirage furious at Hayate's recklessness.

The pair would meet again on Ragna, where Freyja auditions to join Walküre and succeeds. Hayate himself is scouted by Arad Mölders, curious if he is related to an old comrade, Wright Immelman. Mirage is then assigned to be Hayate's instructor, much to her dismay. She is shocked by these turn of events, and the two endure a testy relationship throughout his training. Hayate, determined to prove Mirage wrong, succeeds in beating her after an intense dogfight training session using special VF-1EX Valkyrie.

As war with the Kingdom of the Wind intensified, Mirage grew closer to Hayate, but was unsure of her true feelings towards him. They bond as teammates while aboard the colony attached to the Macross Elysion. At some point, Mirage notices Hayate and Freyja growing closer towards one another, and wonders if she is incapable of feeling the same way. Mirage would later discover Freyja's singing caused the Var Syndrome to affect Hayate. This prompts Freyja to withdraw from singing, upsetting Hayate who only wishes to protect her smile. This conflict all comes to a head when Mirage declares she loves both Freyja and Hayate, and wants to support them any way she can.

On the eve of the final battle on Ragna, Mirage discovers Freyja's rapidly aging condition, and is told not to tell Hayate for fear that he would refuse to fight. Mirage agrees, albeit reluctantly. As Roid Brehm's Protoculture device begins to affects the entire galaxy, Mirage falls into a dream-like state, seeing herself as a child playing inside the cockpit of her grandparent's VF-9 Cutlass and finally understands why she loves to fly. She realizes just how much Hayate means to her accepting who she was, and pushes Hayate to declare his love for Freyja. This finally break's Freyja's stupor, who begins singing and releases the galaxy's inhabitants from the device's control. Hayate and Freyja then form a team, and assault Roid's superweapon. They are assisted by Keith Aero Windermere, who lands the killing blow on Roid.

With the Protoculture device destroyed, and withdrawal of the Windermerian forces, Mirage lands her VF-31 on a beaches of Ragna, and stares contently at the sky.

In this theatrical adaptation, Mirage is constantly paired Hayate, though their relationship remains strictly platonic.

Shortly after Messer's demise, Mirage and Hayate sneak into a Windermerean ship hoping to rescue Walküre. Mirage commandeers a Draken III, reprogramming its IFF signal, as well as altering the external colors to her trademark purple scheme.

Hayate Immelman
Her wingman. She couldn't stand him in the beginning, but as their relationship grows, she realizes he how much he helped her rediscover the joy of flying again.

Freyja Wion
Awkward friend who grows to respect her career. She understands how much she means to Hayate. 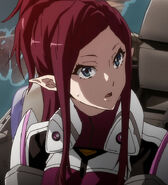 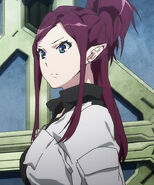 Mirage while in an operation at Al Shahal. 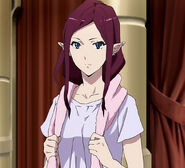 Mirage after taking a bath.

A disrobed Mirage trying to hold onto dear life in 0-G.

A young Mirage in the cockpit of a VF-9E Cutlass in her grandparent's hanger, dreaming of flying one day.

Mirage Jenius featured on the cover of the fourth Blu-ray cover.

Art featuring Mirage and her fellow teammates at Delta Flight.

The ever curious Mirage in Delta Mini-Theater, answering the series' most pressing questions.

Kit cover of Mirage's VF-31C with Super Parts, during the battle among the asteroids, featuring Walküre.