1 of 4
Add photo
The Miss Macross Contest (ミス・マクロスコンテスト, Misu Makurosu Kontesuto?) is a beauty and talent competition that was first held aboard the SDF-1 Macross in the Super Dimension Fortress Macross television series. Subsequent contests were held throughout the series, including a real-life talent search in Miss Macross 30 Contest.

The Miss Macross Contest is a beauty and talent competition that began in the ninth episode, Miss Macross (SDFM) of the Super Dimension Fortress Macross television series. It was created to help boost morale of the population aboard the SDF-1 Macross under the guise of celebrating the launch of the ship from Earth. The winner of the competition was Lynn Minmay, chosen by popular vote.

A similar talent and beauty competition was held in the Macross 7 television series to select members of Jamming Birds. Contestants were judged thoroughly by Dr. Gadget M. Chiba, which included Milia Fallyna Jenius.

In A.D. 2050, Ranka Lee entered the competition in the fourth episode, Miss Macross (Macross F) of the Macross Frontier television series. During the talent portion, she sang "My Boyfriend is a Pilot", but unfortunately lost. Despite her loss, she captured the hearts of many aboard the Frontier fleet, and soon made her debut as a singer.

The revival of the Miss Macross Contest was also a key plot point in Macross The Musicalture. In 2062, the 29th Super Long Distance Colony Emigrant Fleet was undergoing political and social unrest. The mayor, Serge Coban Glass, in hopes of reviving his flagging ratings and increase the morale of the population of City 29, decides to restart the Miss Macross competition.

For the Macross 30th Anniversary Project, the historic Miss Macross 30 Contest was held in 2012. The goal was to seek out beings "that soar into galaxies like Macross heroines." All applicants had to do was use JOYSOUND's CROSSO's "Utaski Video" karaoke machine to sing and any song from the series. The criteria to join was to be single and aged 12 to 25 years old. The contest was broken down in two prizes, winners will either debuti as a singer with the "Singer Wing", or an actress with the "Actress Wing".[1]

Lynn Minmay standing alongside the other contestants of the Miss Macross Contest.

Lynn Minmay's measurements in the swimsuit portion of the competition.

Ranka Lee beside the more buxom contestants of the Miss Macross Contest in Macross Frontier.

Reina Prowler as a contestant in the Miss Macross Contest, as seen in Uta Macross Sma-Pho De-Culture.

The visual for Miss Macross 30 Contest, held as part of the Macross 30th Anniversary Project.

Miss Macross 7 is the name of the Roman Album for Macross 7, and featured Mylene Flare Jenius on the cover with Gubaba. 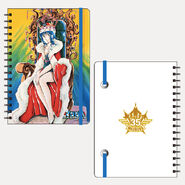 The Haruhiko Mikimoto art of Minmay winning the Miss Macross Contest was used as a key graphic for some merchandise during Macross' 35th anniversary.
Add a photo to this gallery

Retrieved from "https://macross.fandom.com/wiki/Miss_Macross_Contest?oldid=42076"
Community content is available under CC-BY-SA unless otherwise noted.