Initially, Moaramia acted as a rough and passionate Macronized Zentradi warrior, but after Milia Fallyna Jenius showed her kindness, her demeanor began to soften. Moaramia eventually grows to be a bright, young pilot of the Dancing Skull team. She's friendly, cute and full of energy, and is grateful to have been "saved" by her adoptive parents, Maximilian Jenius and Milia Fallyna Jenius, whom she affectionally calls "Papa" and "Mama".

She has doubts about the purpose of fighting and the continued existence of the U.N. Spacy, something that would later prompt her decision to either leave the Dancing Skull team, or stay and fight.

In A.D. 2018, Moaramia is part of group of rogue Zentradi Fundamentalists assigned to take out enemy "ace" pilots. On one fateful mission, she encounters Dancing Skull team, led by Maximilian Jenius and Milia Fallyna Jenius. Even at a young age, she proves to be a deadly foe in her Neo Glaug, but is eventually shot down by the Jeniuses and taken prisoner by the U.N. Spacy.

Moaramia, still Macronized, struggles while in captivity. Milia speaks to young Moaramia, who states that if she were a true warrior, she would follow those that have defeated her in single combat. She reluctantly agrees, under one condition - that she adopts her as their daughter. Max is reluctant at first, but eventually caves in when he realizes the wisdom in Milia's words. Moaramia is later sworn into the Dancing Skull team alongside her adoptive parents, and the family set out on many deadly missions through the years.

Having grown up fighting all her life and knowing nothing of "culture", Max and Milia somehow raised Moaramia to be a cute, sweet and friendly young lady. The signature color she picks is bright purple, like her hair. Through the years, she matures into a bright young pilot, donning the Dancing Skull's signature uniform. However, she is soon confronted by an enemy much like her, and is shaken to the very core on how she can proceed...

The game has a good or bad ending, depending on the player's actions.

If the player chooses the good ending, after the military operation is over, Moaramia confesses her feelings to her parents, and chooses a life of culture other than combat. She then formally retires from the U.N. Spacy.

If the player gets the bad ending, after the operation is over, she is drunk with powerful emotions that rises from the inside of her own heart and does not ever stop fighting.

Moaramia Jifon, held captive aboard the flagship of the Dancing Skull team.

A young Moaramia, eager to finally have real parents, and is later assigned to the Dancing Skull team. 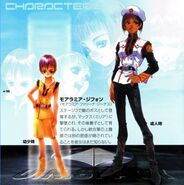 An older, more mature Moaramia Jifon.
Add a photo to this gallery

Retrieved from "https://macross.fandom.com/wiki/Moaramia_Jifon?oldid=42807"
Community content is available under CC-BY-SA unless otherwise noted.