Macross 7 the Movie: The Galaxy's Calling Me!
Macross FB7 Galaxy Flow Soul: Listen to My Song!

Mylene Flare Jenius (ミレーヌ・フレア・ジーナス, Mirēnu Furea Jīnasu) is one of the main characters of the Macross 7 television series and the Dynamite: 7 Mylene Beat manga. The seventh and youngest daughter of Maximilian Jenius and Milia Fallyna Jenius, she provided the bass guitar and additional vocals to the popular rock group, Fire Bomber. She would later pilot the VF-11MAXL Thunderbolt Custom for Sound Force. She has an alien furball like pet, Gubaba.

She was the main focus during the Macross 15th Anniversary and later, Macross 25th Anniversary Live: Minmay meets Fire Bomber, where she crossed through space and time to perform with Lynn Minmay.

Mylene is a cheerful yet headstrong young girl, still unsure of her own feelings. On one hand she liked and admired Gamlin Kizaki, the man her mother chose for her, and enjoys their uncomplicated and, for the most part, platonic relationship. However, she was also fascinated by Fire Bomber's lead vocalist/guitarist Basara Nekki, despite his constant selfishness and rudeness to her; she nagged him constantly, and became jealous whenever she saw him with another woman. When it was suggested that Basara and Rex (a female biker who is a fan of Fire Bomber) were physically involved, she immediately became jealous, although she refused to admit it.

This lead to one of the Macross universe's infamous love triangles, and she was relieved when the two men ended their bickering and became friends, though her hatred of uncertainty—in this case, whom she loved more—became a source of endless frustration for her (as well as her mother).[1]

Being the daughter of two of the most famous elite pilots from Space War I, Mylene has been around variable fighters for most of her life, and as a result can adapt to models old and new and use all of them to full capacity, even ones with a unique control scheme like Basara's Fire Valkyrie. However, her penchant for emotional outbursts can sometimes affect her judgment, leading to her getting shot down on occasion.

Her skill as a bass guitar player is quite notable, but her voice also has a powerful yet calming tone to it that adds a new dimension to Fire Bomber's song repertoire. This later exhibited the potential to release a great amount of Song Energy, but it can only reach maximum potency when paired with Basara's own.

Mylene was born in February, becoming the seventh child of Space War I heroes, Maximilian Jenius and Milia Fallyna Jenius.

At the age of 14, Mylene was living in an apartment of her own aboard City 7, a massive city-ship carrying over one million people and escorted by a large battle fleet, led by Battle 7. Her parents (Max, the captain of Battle 7 and Milia, the mayor of the domed City 7) were also aboard but were now separated. All of their other children, now aged between 19 and 34, have moved away from City 7, leaving Mylene's parents to focus all of their protective instincts and concerns on her.

Mylene proved to be as willful as her parents. Her mother wanted her to settle down and marry career fighter pilot Gamlin Kizaki, a protégé of hers, despite the fact that Mylene was only 14 and didn't want to get married yet. In episode 6, Milia arranged an Omiai, a Japanese custom where individuals are introduced to each other to consider the possibility of marriage. Mylene, though apprehensive, agreed to meet him to appease her mother. Once they actually met, the two became good friends, and Gamlin started to fall in love with her, becoming protective of her.

Her father was worried about her wild nature as well. However, what Mylene wanted to be was to be a rock star, so against her parents' wishes, she joined the rock band Fire Bomber as a bassist and vocalist. It soon emerged that she inherited her parents' natural piloting skills and could pilot a variable fighter extremely well; though all were initially opposed to a young girl facing such danger, she was ultimately allowed to join Sound Force, piloting her own customized VF-11MAXL Thunderbolt Custom whose control systems have been modified to resemble an electric bass guitar.

Mylene thinks little of her Zentradi heritage until episode 11, when she landed the lead role in a movie. She played the part of Lynn Minmay in the movie, titled The Lynn Minmay Story which documents Minmei's role in the Space War I. Mylene was initially scared when she met the full-sized Zentraedi, who were approximately 15 meters (50 feet) in height and would be starring in the film. Mylene apparently had never seen a full-sized Zentraedi until then and the sight made her uncomfortable. Later, as she talked to Ray Lovelock, another member of Fire Bomber, she thought about the fact that her mother, Milia Fallyna Jenius, was a full-sized Zentraedi before she was micronized. Ray then told Mylene that she has the blood of giants running through her veins.

Despite the danger of joining Sound Force, which put her in direct combat with the powerful and deadly Protodeviln, who were virtually immune from all conventional weaponry and were only vulnerable to Sound Force's music, Mylene proved that she also has her parents' bravery. Throughout the year-long struggle of City 7 against the Protodeviln and The Varauta Army, Mylene never once gave into fear. Mylene proved herself to be an excellent pilot throughout the war. In the final battle against Lord Geperunitch, Mylene fought alongside her parents.

Mylene featured on the cover of Newtype magazine.

Mylene on a book cover.

Mylene on another book cover. 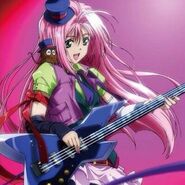 Mylene in a cute outfit with matching hat for Gubaba.

Mylene relaxing in the beach. 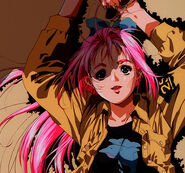 Mylene relaxing under a tree, art drawn by Haruhiko Mikimoto. 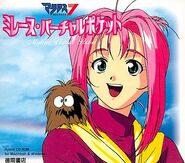 Mylene on the cover of Macross 7 Mylene Virtual Pocket CD-ROM software released on October 27, 1995 and developed by Tokuma Shoten.

Mylene as Minmay in the The Lynn Minmay Story.

Mylene on a date with Diamond Force's Gamlin Kizaki. 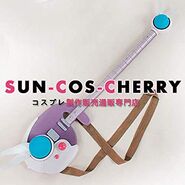 Mylene unsure of her feelings towards Gamlin Kizaki and his token of affection.

Mylene determined to take the role of Lynn Minmay seriously in an art plate.

Mylene having feelings for Basara, dressed as Hikaru Ichijyo.

Art plate of Mylene channeling her inner Minmay, falling from the sky hoping Basara would care enough to take her into his cockpit.

Mylene and Basara actually talking to Hikaru Ichijyo in the Magical My Friends event in Uta Macross.

An art plate of Mylene after her work out, hearkening to the original series' credit sequence. 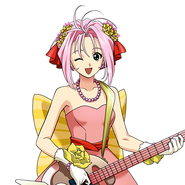 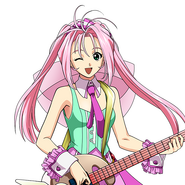 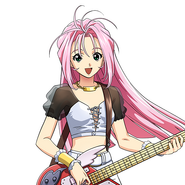 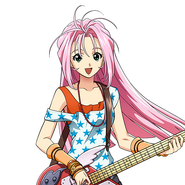 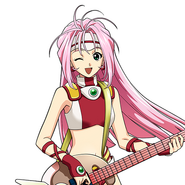 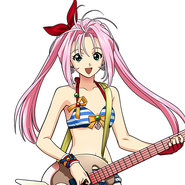 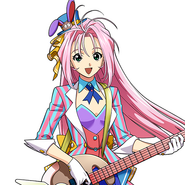 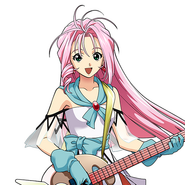 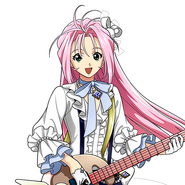 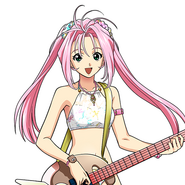 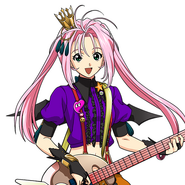 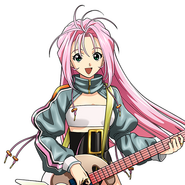 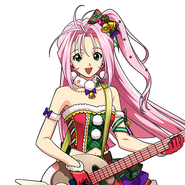 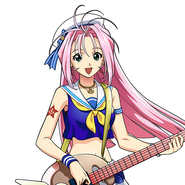 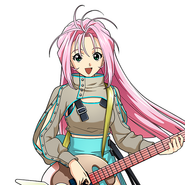 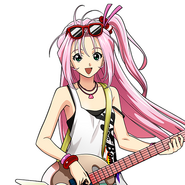 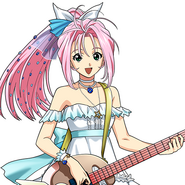 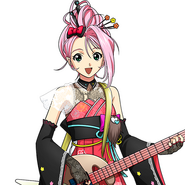 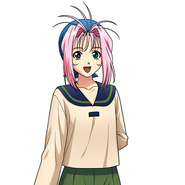 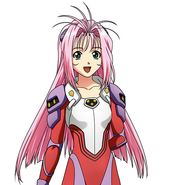 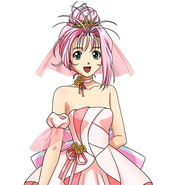 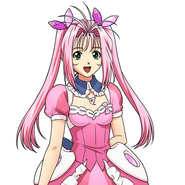 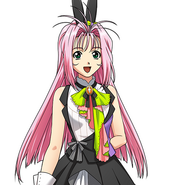 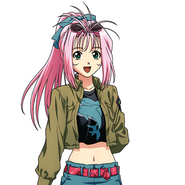 According to character designer Haruhiko Mikimoto, no model was used to inspire Mylene's design. Her hair was initially going to be orange. A variety of other patterns and designs were considered, with one version having green hair and a star-shaped face paint on the left eye.[3] Her design was given a more childlike character that is more neutral than Mikimoto's previous work with Lynn Minmay. An instruction by the director was given regareding her chest that "smaller is better".[4] There is a statement that "small" is the preferred size.[5] The size of the chest is not specifically mentioned in the series, but it is an element often referred to in various media and producer comments.[6]

The outfits of Mylene, which changes constantly throughout the series, were designed by Kenichiro Katsura, who was in charge of the animation for the characters. He avoided clothes that overemphasize sexiness that were often found in anime heroines at the time, often due to their character and age. Katsura was inspired by the daily fashion found in the "Petit Seven" town.[7]

While Chie Kajiura, who was in charge of the singing voice of Mylene, was delighted that sales for the merchandise tie-ups were strong when Chie made her debut in Macross 7, she had to work hard to distance herself from Mylene's image. Her feelings towards Mylene are compicated, and for a time, she felt there was no choice but to ignore Macross 7 and force a change from her own media image handlers. She detailed this in her blog, and that despite everything, strongly said that she does not dislike Macross 7.[8]

Since 2007, Chie has performed in Macross 25th Anniversary Live: Minmay meets Fire Bomber , and has regularly been doing Macross 7 related work. In 2011 (February 2, 2012, which is the birthday of Mylene in Tokyo, February in Osaka) Chie hosted "Mylene Night", along with Tomo Sakurai, the voice actor for Mylene.

In Uta Macross Sma-Pho De-Culture which launched in 2017, auditions were conducted after Tomo Sakurai announced her retirement in the previous year. She was replaced by Aya Hirano.[9] However, Tomo announced she is coming back to work after her retirement in 2019.