Though really young, Pinon absolutely despises being treated like a child. She asserts her "maturity" by talking down on some pilots, often telling them that succeeding in a simple defense mission is supposed to come naturally.

She can be a bit foul-mouthed during high-stress situations, but many people find this tendency lovable, especially senior operator Claire Stanford.[1]

As an operator, Pinon's judgement and analytical skill is astounding, rivaling that of seasoned operator Itsuki Yamashiro. The delivery is a bit crude however, due to her "high-and-mighty" stance during a status report.

As is the case with many intellectuals, athletics are not her strong suit.[2][1]

A genius who became a military operator at a young age, Pinon is indeed smart, but does twice the work while on duty to prove that she earned her position without any special treatment.

By day, Pinon is a student of Mihoshi Academy who sometimes acts as teacher-in-charge of a Special Lecture & Training Class for all courses, but by night, she's on CIC detail as part of of a New United Nations Spacy Special Operations unit. She has a hobby of collecting ribbons.

Pinon serves as one of the player's operators in the latter two Frontier games, selectable between time frames like the rest.

Claire Stanford
Pinon is mostly annoyed but at the same time slightly afraid of her mischievous senior, since on top of treating her like a kid, she also falls victim to the latter's practical jokes.

Itsuki Yamashiro
Senior co-worker/teacher at school and in the military. Pinon occasionally tries to conduct her classes over Itsuki's schedule, but is always thwarted. 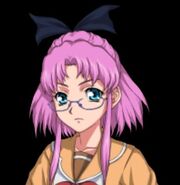 Pinon's profile in MTF's Academy Mode.
Add a photo to this gallery

Retrieved from "https://macross.fandom.com/wiki/Pinon_Colette?oldid=39429"
Community content is available under CC-BY-SA unless otherwise noted.