Q-Lulu is Mirage Farina Jenius's beloved pet mercat, seen in the Macross Δ series' opening being hugged really hard by her. Q-Lulu is fond of swimming and sleeping all day. She has taken a liking to Freyja Wion's sentient wrist phone, often playing with it when they're together.

She is not often seen interacting with the other Mercats in Ragna, especially Don the Mercat, preferring to lounge around in the Walküre dormitories. Mirage takes her on walks however, as seen in Delta Mini-Theater. Mirage is not known to bully her little Q-Lulu, as there is a Ragnan proverb that bullying a mercat will bring misfortune to yourself.

Mirage Farina Jenius hugging Q-Lulu on her bed during the series' opening sequence.

Mirage wearing a Q-lulu outfit, while holding Q-Lulu in a Walküre pajama party.

Q-Lulu sleeping on a smiling Freyja.

Q-Lulu enjoying being held by Freyja.

Q-Lulu resting on a dancing Makina Nakajima and Reina Prowler during the jellyfish festival on Ragna.

Kaname Buccaneer sitting by the windowsill, as little Q-Lulu sleeps on her lap. 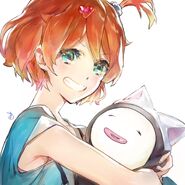 Freyja with a happy Q-Lulu. 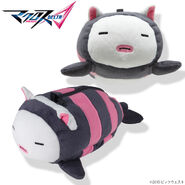 A special Q-Lulu scarf that was made for the Macross Delta Elements H pop-up store.