As a veteran of the Unification Wars, Roy Focker is a brave and capable, what some would describe as a "man's man." His rough nature belies his compassion and sense of humor, even during grim situations. He is considered by his peers as a ladies' man, so to speak, to the extent that he always begins motions toward cute girls, even while on-duty.

At the same time, he is a person who has previously risked his life for the woman he likes, and in a sense, one could say that he has one rational view of women.[1] This is evidenced in how he did not hesitate to save Aries Turner and Sara Nome when they were in danger in the Macross Zero OVA, or when he gave his life in the film The Super Dimension Fortress Macross: Do You Remember Love?, or how he did not want to worry Claudia LaSalle after he had been fatally wounded in the original television series. He also enjoys offering advice to his wards, whether it be Shin Kudō or Hikaru Ichijyo regarding life and love. While some may take offense on his perspective, he does so without malice and with the purest of intent.

Roy is a skilled pilot who had been chosen to work on variable fighters during its development. He is one of the few veteran pilots that survived the Unification Wars, and was heavily involved in the incident on Mayan Island. While his initial duel against his former instructor, D.D.Ivanov, was inconclusive, he did help turn the tide against Anti-U.N. Forces that were assaulting the CVN-99 Asuka II. He can also perform complicated maneuvers like a boost to inverted climb which he taught to Hikaru Ichijyo.

Roy was like a playboy during the Unification Wars and he often had a good time with the young women personnel attached to the base.[1]

Roy was assigned to a U.N. Navy carrier as part of the group to train pilots for the VF-0 Phoenix. By this point, he was already an expert in the operation of variable fighters and a decorated veteran of earlier battles during the wars. When Anti-U.N. Forces appeared in the skies over Mayan Island, his squadron - codenamed Skull Squadron - was deployed to counter them. This saw the first air battle between the SV-51 and the VF-0. After the initial conflict, Roy resumed training operations, even bringing several pilots into U.N. Spacy to begin training on the variable fighters, such as Shin Kudō. His leadership and skill as a pilot eventually won him a transfer to South Ataria Island to take up position as squadron leader for the SDF-1 Macross.

He accomplished many feats during the Unification Wars such as shooting down more than 180 planes and nailing five fighters while hungover. (SDFM: "Boobytrap")

Being a an ace, he was hounded by many women, but his lifestyle changed when he met an officer named Claudia LaSalle who later became his girlfriend. (SDFM: "Rainy Night")

On February 6, 2009, Roy and Claudia went out partying. The following day, the SDF-1 Macross was to embark on its maiden voyage. Introduced by an Announcer, Roy provided commentary on an aerobatic demonstration by the U.N. Spacy's newest and most powerful fighters at the time. He presented the VF-1A Valkyrie Angel Birds led by Max Jenius. The audience were amazed by the abilities of the pilots. He told the audience to keep their eye on planes #1 and #2 because they would pass each-other only 20 meters off the ground at 150 kilometers per hour and the planes would only be just a few meters apart. However, his guest Hikaru Ichijyo flew into the presentation, frustrating him majorly and the audience (among them, Lynn Minmay and Yoshio) that was watching him laughed. Hikaru proceeded to do a boost-to-an-inverted-climb which both frustrated and impressed Roy.

After landing, they walked past an FL-200 Mistral while boasting about their piloting achievements, he believed Hikaru to be cocky for winning the amateur pilot competition two or three times (7, which Hikaru corrected) but he brushed it off, and boasted he shot down more than 180 planes during the Unification Wars, Hikaru jokingly calls him a murderer and he swears that he was just doing his job, and so after Hikaru gets cans of Petite Cola, Hikaru reminds him that he also swore to Hikaru's dad to return to the flying circus after the wars but he never did, he apologized and explained to Hikaru that one would have to fly a fighter plane to understand. The Petite Cola machine rolled way and they saw Yoshio demanding a cola from Lynn Minmay. While Minmay walked Yoshio to the bathroom, Roy stared at her skirt and grinned. Roy later let Hikaru check out a VF-1D Valkyrie, specifically one labelled VT-102, he was about to let Hikaru fly it with himself in the back seat but when the Macross automatically activated its cannon, Hikaru saw the beam and called it it a "flashy salute" and Roy decided to find out what the beam was, telling Hikaru to stay right there.

When Captain Global, via First Lieutenant Hayase ordered all fighters to scramble, Roy got into his VF-1S, going to war for the first time in 2 years. Hikaru, who stayed in the cockpit as he said, was sleeping. Misa appeared on Hikaru's screen, wondering why Hikaru's VF-1D (VT-102) hadn't taken off from the Display Grounds. Hikaru did take off and flew into his battle. He appeared on Hikaru's screen and told all fighters in the Sepia and Mont flights to scatter the enemy units in Zone 428. Hikaru, realizing he was the Skull Leader, hailed him. Roy asked Hikaru when he became a fighter pilot, but he believes he'd never become one. He screamed as he came off of Roy's screen screen but he's ok. Roy told Hikaru to keep it level, and fly in formation like in an airshow. He casually launched missiles on a Gnerl approaching VT-102. Hikaru couldn't believe he could be so laid back in a time like that. He joked that in airshows, he'd would always be in front with Hikaru puttering behind. Hikaru shouted that he wouldn't be behind Roy forever and Roy praised his spirit and led the way. He swept VT-102's wings back but he was hit by beams from a Gnerl. He blanked out, flashing back to when he was piloting Fokker D.VII biplanes. Remembering Roy in a biplane waving goodbye, he woke up to find VT-102 spinning towards the ground. (SDFM: "Boobytrap")

After Captain Global realized that the first wave was just a decoy he asked Misa if Focker's squadron could come back to guard the Macross. Roy could not as he was still fighting off the first wave and couldn't break away yet. Later, led the Skull Squadron back to the SDF-1 in his VF-1S. He hailed the bridge with the callsign "Gunsight One" and told Misa that he had sent the enemy back to where they came from. Claudia asked him how many did he get and was surprised when he replied with only ten, saying after two years of peace made him a little rusty. He then asked for a locale on VT-102 and was pleased to learn from her that Hikaru managed to make an emergency landing and then told the rest of his squadron to head back to the Prometheus. He flies around the city, spotting VT-102 and hails Hikaru.

Roy died from wounds sustained while defending Macross from Milia Fallyna's force of Queadluun-Rau battle suits. Instead of going to the hospital to treat his wounds, he choose to play the guitar while waiting for Claudia LaSalle to finish her pineapple salad; while she was cooking for him, he collapsed from a sudden internal bleeding and passed away few minutes later.[2] Subsequently, he was buried at sea.

In the Do You Remember Love? movie that chronicles the events of Space War I, Roy Focker is an ace pilot and leader of the Skull Squadron as he was in Space War I, he gets captured by the Zentradi along with Hikaru, Misa, Minmay and Kaifun. During a Meltrandi attack led by Milia 639 on Vrlitwhai Kridanik's ship, the humans take the opportunity to escape. Minmay and Kaifun remain captured and Roy dies, only Misa and Hikaru leave the ship. Instead of being succeeded by Hikaru as leader of the Skull Squadron, the movie shows Max temporarily being the Skull leader until Hikaru returns from being MIA [3]

Hikaru Ichijyo
Hikaru is Roy's kōhai. Hikaru is a person who is like a younger brother to Roy. Although Hikaru enlisted and became his subordinate, they still had their usual frank conversations with each other, and it was a relationship that wasn't different from what they had before. Also, by becoming his subordinate, he seems to have given even more attention to Hikaru's mental side. Even just before his death, he spoke of Hikaru's circumstances.[1]

Roy back when he was flying with Hikaru Ichijyo's father. 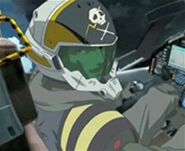 Another shot of Roy in the pachinko game.