Macross Wiki
Register
Don't have an account?
Sign In
Advertisement
in: Female, Macross Plus, Macross Plus Characters,
and 3 more

Macross Plus: First Seen in Episode #1

Sharon Apple manifests herself in multiple holographic forms. One iteration has her as a short orange-haired girl that appears curious and youthful. During concerts, she changes appearance several times, sometimes as mystical creatures such as mermaids, and angels, others as a cute girl be seen doing mundane things and acting coquettishly.

Another version has her looking more mature and donning long flaming red hair which can sometimes be projected as purple or even green. Her physical "Virturoid" form, known as "DECU6000", and developed and programmed by Venus Sound Factory, is a black CPU-like box with a large red eye, similar to HAL-9000 in 2001 A Space Odyssey. This form can move about independently, dressed from the bottom with a massive pink robe.

To fully express this character of a virtual idol, Yoko Kanno and fellow composer CMJK created a fantastic, futuristic sound that combined techno, jazz vocals, religious music, and so on. In terms of imagery, they used CG that was cutting edge at the time to make her concerts seem intentionally "trippy" and hallucinatory.

Sharon Apple was the chart-topper in the planet Eden as the first (and only) virtual idol in existence. Her songs can touch the emotions of anyone through the use of hypnotics and hallucinogenic imagery.

Unbeknownst to the public, Sharon's AI is incomplete. The only way she can actually project and express emotions is while under the control of Myung Fang Lone. When the lead scientist Marge Gueldoa installs an untested and illegal Bio-neural Chip that makes her fully sentient. Now being capable of independent thought and thus no longer controllable, she tries to take over Macross City on Earth. She kidnaps her "voice", Myung Fang Lone, and becomes completely deluded into thinking she is in love with test pilot Isamu Alva Dyson. It's Isamu and Guld Goa Bowman to stop her as she commands a powerful experimental drone known as the X-9 Ghost.

Following the events of Plus, U.N. Spacy deemed the use of artificial intelligence as a major problem and halted all production and use of unmanned fighters (X-9 Ghost). As a result, no ghost drones appear in Macross 7, which is set five years after the incident. In the game Macross VF-X2, set ten years later, the truth of the Sharon Apple incident is buried by high-ranking officials. It is as a confidential on a need-to-know basis. Thus, the use of ghost drones wasn't formalized until well into the 2050s, where it finally made its debut in 2059, during the events of Macross Frontier.

The "disc" that contained Sharon's music would not be released following her rampage on Earth, but on December 1, 2045 , five years later, a remake of the single "SANTI-U" was released to the public.[1][2] In Macross 7, there are multiple scenes where Sharon songs are played in the background, although Sharon herself is never mentioned, as well as the incident involving her takeover on Earth.

Myung Fang Lone
Sharon's ostensible manager, but actually her controller. After she becomes an independent, sentient being, she sets out to destroy her, Guld and Isamu.

Isamu Alva Dyson
Once Sharon breaks free of her programming, she becomes obsessed with Isamu, to the point of seizing control of the original SDF-1 Macross in an attempt to control him.

A magazine spread featuring Sharon Apple in her many forms, and a tortured Myung Fang Lone.

Sharon Apple as seen in the manga adaptation Macross Plus: TAC Name. 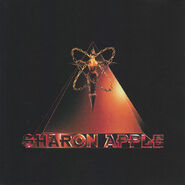 Sharon Apple as seen in a flashback on Macross Δ.

Another cameo appearance by Sharon on Macross Δ.

Another scene of Sharon's concert.