Sheryl is a beautiful, strong and self-assured girl who carries her confidence through her music and she was originally from the Macross Galaxy fleet where she was raised by Grace O'Connor (Sheryl's foster parent). She helps recognize the singing talent of Ranka Lee. As the series progresses, the two share a friendly professional and romantic rivalry. While she may have affections for Alto Saotome, she does occasionally have fun teasing him.

Sheryl's grandmother is Mao Nome who is a member of the Wind Maiden family on Mayan Island, Southeast Asia. While Sara Nome (Mao's sister) despised interacting with the modern civilization in order to fulfill her duties as a maiden, Mao loved technology and despise her life on the island.

In 2008, when the Protoculture "Bird Human" is resurrected above the waters of Mayan Island, the United Nations Military tries to eliminate it with reactionary weaponry. Sarah, who was in control of the "Bird Human" vessel, uses its powers to absorb the reactionary payload and then folds into space to protect the island from radioactive contamination.[1] Following the disappearance of her sister, Mao then engages in the research of Protoculture, while also giving birth to her daughter Sally. She helped organize the 117th Research Fleet to investigate the astrobiology of the Vajra. Shortly after that, Mao visited the Gallian system who had been in charge of investigating Vajran activity, but her fleet was ambushed by the Vajra and destroyed.

Born to Abel Kuro and Sally Nome, Sheryl's family was among the many who rebelled against the mandatory cybernetic implants of the Macross galaxy, escaping from her home when the government came for the dissidents. She was able given the Fold Quartz earrings as the sole link to her family.

Sheryl was found living on the streets of the the Macross Galaxy fleet. She was found by Grace O'Connor, who recruited her into Erato Academy, an academy known for children who had been disowned but found it difficult to exceed due to the trauma of her family's death.

The Fold Quartz earrings activated during a musical to see who would obtain the main role. Around that time she befriended Lilyth Amagi, the daughter of a Kabuki Actor family who was competing with the Saotome. The Fold Quartz earrings would activate by her singing. Lylith sacrificed herself to save Sheryl and also raises Grace's interest in Sheryl. Thanks to her newfound resolve, Sheryl becomes a better singer and became a vital part of Grace's personal agenda.

Unbeknownst to her, her grandmother was Mao Nome who died many years ago following a Vajra attack. She inherited a special set of Fold Quartz earrings, which she later discovers holds a secret power that is affected by her music.

Sheryl was to perform at the Macross Frontier space colony as part of her tour. She encountered Alto Saotome who was a backup performer for her concert. After an attack by an alien species on the colony, her fans tried to escape the devastating attack while she drove off safely with Grace and Catherine in a limousine, aggravating Alto due to the fact that Sheryl bore no thought in her heart for her many fans. (F: "Cross Encounter") Following the departure of the Macross Galaxy, Sheryl is forced to stay aboard the Frontier and enroll in Mihoshi Academy and its pilot training course.

Her health slowly declines as her immunity towards the V-type virus that originated from the Vajra wears off. By August 2059, Sheryl is hospitalized and forced to cancel all her concert events. Meanwhile, Ranka Lee's career begins taking off. Sheryl's situation turns for the worse as she is seemingly betrayed by Grace, and swears off singing for good. One day during an attack by the Vajra, she stares at her Fold Quartz earrings and remembers Alto encouraging her to never stop singing. She then begins singing to the distressed citizens in the evacuation shelters where people stare at her in awe. Meanwhile, Leon Mishima successfully pulls off his coup d'état, seizing the government and overthrowing President Howard Glass. He attempts to have Ranka perform during a memorial service following the destruction of Island 3, but Ranka refuses and flees with her brother Brera Sterne, seemingly retiring for good. Sheryl's career on the other hand, is reinvigorated as she hires Elmo Kridanik as her new agent. She holds a number of charity concerts for the victims of Vajra, performing new versions of songs such as "Northern Cross" and "Yousei".

In the final battle at the Vajran homeworld, Sheryl sings on the Battle Frontier's special concert stage hoping to repel the Vajra for good, but are pushed back by a brainwashed Ranka, whose song echoed on the battlefield. The S.M.S. and Alto Saotome return to the fleet following a brief exile, and they reveal to the public about the conspiracy of the Galaxy fleet to seize control of the Vajra.

Thanks to Sheryl's song, Ranka, now freed from control, sings with her while Alto flies to eliminate Grace, who has taken control of the Vajra Queen. As Grace lies defeated, Sheryl's affliction stemming from the bacteria of V-type infection is miraculously cured. With the Vajra gone, Sheryl, Ranka, Alto and the rest of the Frontier fleet settle on their new world.

In the manga piece Sheryl ~ Kiss in the Galaxy ~ by Kariko Oyama, it is shown that she has a father named Abel Kuller/Kuro and a mother named Sally Nome who were shot dead and they were likely to be taken away due to the Destruction Act during Sheryl's birthday on November 23, 2048. She is rescued from her life in the slums by Grace O'Connor, and she enters the vocal school "Elateau Music Academy" after three years. While many students' singing voices were enhanced by vocal implants, Sheryl's own voice was naturally powerful and strong. Sheryl finds a friend in Lillith Amagi that the two help develop each other's talents. However, Lilith is killed following an attack by the Vajra and Sheryl then vows to become the galaxy's most famous and beloved singer.

At first, Sheryl enjoys teasing and bullying Alto to a certain degree that she grows to respect him more as Alto asserts himself as a pilot and encourages her to never stop singing. In the film Macross Frontier Movie: The Wings of Goodbye, it is revealed that Alto had met Sheryl when they were children where she vowed to be the greatest pop star in the galaxy.

Ranka is Sheryl's would-be rivalry both romantic and professional-wise who first sees talent in her and encourages her to pursue a career in showbiz that it grows jealous as Ranka is picked up by Grace O'Connor.

Grace is Sheryl's guardian and manager who saved her from a life of poverty in the slums of the Macross Galaxy that Garce gave her shelter and honed her singing voice, which eventually makes her a massively popular star.

Yasaburō offers Sheryl shelter when she had nobody to turn to.

Sheryl arriving at the Frontier

A new scene featuring Sheryl meeting a young Alto Saotome in Macross Frontier Movie: The Wings of Goodbye
Add a photo to this gallery

Sheryl in her cowboy outfit, art plate from Uta Macross

Another still of Sheryl in "Gorgeous".

Sheryl doing her diva thing in an art plate from Uta Macross.

Stunningly detailed art place of Sheryl lounging like a queen. 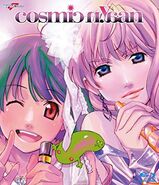 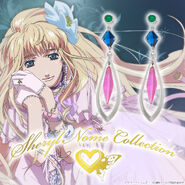 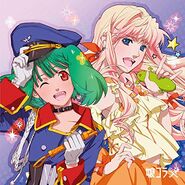 Sheryl - Kiss In The Galaxy Edit

Retrieved from "https://macross.fandom.com/wiki/Sheryl_Nome?oldid=42424"
Community content is available under CC-BY-SA unless otherwise noted.