Sivil ( シビル , Shibiru, Sivil) is a Protodeviln with a female, humanoid form and an antagonist in the Macross 7 television series. She was awakened from her stasis in Varauta by Gigile. She is drawn to the powerful Spiritia given off by the citizens of the Macross 7 fleet and develops an obsession with Basara Nekki after hearing his song.

Sivil is an intensely curious Protodeviln, often acting on her own volition and not bound to her masters. At first, Sivil was focused only on destroying her enemies and gathering their Spiritia for self-preservation, but becomes obsessed with Basara Nekki after listening to his song. The former's "Anima Spirita" drives her into a screaming frenzy that she herself describes as a feeling of ecstasy (if you know what we mean, and we think you do) to her superior, Lord Geperuniti. Not knowing what to make of it at first, she tries to get closer to Basara by infiltrating City 7 and possessing Rex and Akiko Houjoh.

Sivil is able to travel at high speeds throughout the galaxy while wrapped in a protective energy bubble. She also has the power to possess host humans and manipulate them into her will.

She only speaks in single words and phrases. She has a distinctive scream when listening to the Song Energy of Basara.

On the isolated frozen world of Varauta, Gigile descends into a cavernous area and uses a large amount of Spiritia to awaken Sivil from her long slumber. Gigile then asks whether she recognizes him, and she flies off to find Spiritia. He is chastised by Lord Geperuniti for his actions, but Gigile ignores it and wonders where she could have gone. Sivil is first seen headed to the Macross 7 fleet, wiping out the battleship Mamoi and entire squadrons of variable fighters in a single attack. She possesses several human hosts, draining them and others of their Spiritia, but is then confronted by Basara Nekki who begins singing Totsugeki Love Heart to her. She is hit by one of his Fire Valkyrie's speaker pods and is shocked at Basara's Anime Spiritia. She flees the scene, hoping to return and find out more about the brazen human singer.

Basara himself becomes intrigued by her, and hopes the power of his song will be enough to turn her away from evil. This sparks a rivalry between Basara and Gigile , one that would see the latter realizing the error of his ways, and sacrificing himself and foiling Geperuniti's plan to turn the planet Lux into a Spiritia Farm. Sivil herself falls under a deep sleeping state, and is awoken towards by Basara's song. She witnesses Gigile's sacrifice and sheds a tear for him.

Sivil realizes the error of her ways, and fights against her fellow Protodeviln to prevent them from causing a Spiritia Black Hole. The battle finished, she bids farewell to Basara and flees the galaxy.

Basara Nekki
She becomes obsessed with Basara's Spiritia after hearing his song. The two initially battle it out in City 7, but she is defeated due to the power of his Song Energy. Basara then spends the rest of the series trying to revive her from her stasis, even after her fellow Protodeviln abandon her. Once Sivil awakens, she joins his side to fight her former masters.

Sivil is fascinated by human life.

Sivil in a state of sleep after direct exposure to Basara's Anima Spiritia.

One of Sivil's CM Eyecatch images.

Sivil in a magazine spread. 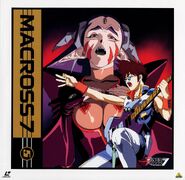 Sivil on the cover of the Macross 7 laserdisc. 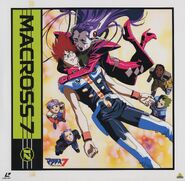 Another laserdisc featuring Sivil and Basara.