It is A.D. 2009. Ten years of furious conflict and frenzied construction have turned an alien wreck into human triumph; the colossal space battleship Macross. On the day of the ship's launch, a world waits with baited breath to witness mankind's next giant leap.

Hovering above the planet, though, the Zentradi, a merciless warrior race, seek to advance their agenda of destruction and conquest. When long-dormant systems aboard the Macross suddenly fire upon the alien fleet, the ship meant to preserve humanity may become its undoing. A war of attrition erupts, taking mankind across the solar system and beyond in a fight to justify its existence [1]!

Super Dimension Fortress Macross is one of the works that symbolized the anime boom of the early 1980's, which began through the success of Space Battleship Yamato and Mobile Suit Gundam. It is characterized by its unique style that is interspersed with the trends of youth culture during its creation, such as "real robot" animation, science fiction, romance and music idols.

After the first cour of its production, strong fan support and healthy merchandise sales led to the series being extended from 13 to 23 episodes (2 cour and half a year of programming) and later, to 36 episodes (9 months of programming and 3 cours long).[2] Furthermore, in 1984, a year after the end of its television broadcast, the film The Super Dimension Fortress Macross: Do You Remember Love? was released, cementing its popularity.

The major difference between Macross and Yamato and Gundam is that the production crew of the series were very young who entered the animation industry as either fans of science fiction (SF) or animation in general.

Shōji Kawamori, who was in charge of mechanical design, storyboarding, and production supervision, and Haruhiko Mikimoto, who was in charge of character design, were classmates in Keio High School and central to the planning of this series. Kawamori and Hiroshi Ônogi who were the series screenwriters, were also students at Keio University during the broadcast of this work.

Kawamori was appointed as a co-director at the time of production of the theatrical version. Toshihiro Hirano (now: Toshiki Hirano), Ichirō Itano, and other veteran animators were involved in the theatrical version's production. Besides professional students, amateur students also participated in the film's production, including Hiroyuki Yamaga, who made his directorial debut, and Hideaki Ogino, Mahiro Maeda, and Yoshiyuki Sadamoto (Sadamoto later worked for Gainax), who was in charge of illustration and painting.

These young staff brought an experimental direction of "making what they wanted to see" to the entire production, and as a result, shared a palpable sense of the generation with their audience. Additionally, it was Noboru Ishiguro, the series' chief director, who recognized this attitude and sense. This sense would lead him to be the president of Artland.

The series originally aired on Mainichi Broadcasting System from October 3, 1982 to June 26, 1983. It was aired at 2:00 pm on Sunday, as the station was trying to develop a new animation time frame, and overall viewership rate remained at a fairly low average of 6.4%.[3] Ratings took a dip due to issues regarding its time slot. However, Yamagata TV, which was broadcasted at 5:30 pm on Wednesday, recorded a high 36% audience rating.[4]

The series was originally licensed in North America by AnimEigo, who restored the series and released it unedited on DVD with Japanese audio and English subtitles [5]. At first, a limited edition pre-order boxset across nine discs was released on December 21, 2001. Preorders were available on AnimEigo's web store. Three smaller boxsets, each comprising three discs, were released from September 10, 2002 [6][7][8]. Finally, AnimEigo released nine individual volumes. In 2003 Madman Entertainment released a six-disc PAL format version of this edition entitled Macross Ultimate Collection.

In the summer of 2005, ADV Films announced that it would be releasing an English dub of Macross on January 10, 2006. It was later announced that Mari Iijima would be reprising her role as Lynn Minmay in English.[9] To commemorate this, Robotech.com then allowed fans to post online questions that would be answered by Mari Iijima herself.[10][11] Hikaru Ichijyo was voiced by Vic Mignona, the voice of Edward Elric of Full Metal Alchemist and Kurz Weber of Full Metal Panic![12]

The dub was streamed by Hulu in the United States from February 2010 but was removed in February 2013.[13]

The main cast featured on the blu-ray box set, illustrated by Haruhiko Mikimoto.

Closer detail of the cover of the Macross blu-ray box set.

A small tie-in booklet for the series, featuring numerous photos of Mari Iijima.

This Is Animation Issues #3, which contains numerous preproduction sketches and miscellaneous material. Each issue covers a set number of episodes.

Cover for This Is Animation Issues #5.

Cover for This Is Animation Issues #7.

The second volume of the novelization of the Macross television series, published in 1983. 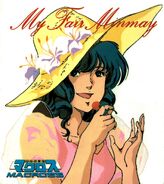 The series spawned numerous tie-ins, including My Fair Minmay, which was written several Studio Nue staff and published by Am Ju Ju in 1983. It details Minmay's rise to stardom aboard the SDF-1 Macross.

Another tie-in Misa Hayase: White Reminiscences, which gives greater backstory to Misa Hayase and her relationship with her father, Takashi Hayase. 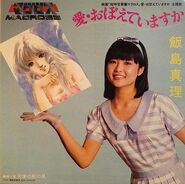 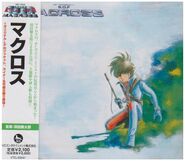 Album cover for a reissue of one of Macross' soundtrack CDs that was released on April 23, 2008. 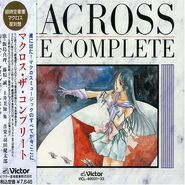 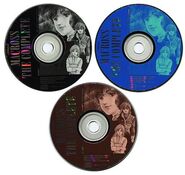 The three CD's album art from the Complete soundtrack collection. 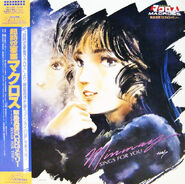 Minmay Sings For You, a tribute album that was released in 1986 by Victor Musical Industries, Inc..

Big West spun off its success to create the Super Dimension Trilogy, which included Super Dimension Century Orguss and Super Dimension Cavalry Southern Cross. Similar works that had similar concepts followed, such as Genesis Climber MOSPEADA and Megazone 23. In particular, Megazone 23 was produced by Artland and several Macross staff. It was the first blockbuster in the growing OVA genre, and is a historical trendsetter that became the forerunner of the current trend of "Mecha and Pretty".[15] The series also heavily influenced themes that would be common in mecha anime, such as “love”, “peace”, “heritage of ancient civilization” and so on. Countless homages, such as Martian Successor Nadesico were born from this.

The popularity of this series and Urusei Yatsura encouraged the rise of young creators in their early 20's to the forefront as production companies sought to attract these young, talented personnel. Mamoru Nagano, who worked on Heavy Metal L-Gaim stated that he was hired by Sunrise to be their full-time designer because Macross greatly impacted them. Staff were quoted saying, "I felt like it was better to leave it to a young man".[16] Nobuteru Yūki (Escaflowne, Yamato) saw deeply affected by the 27th episode, "Love Drifts Away" so much that it became the catalyst for him to move into the animation industry.[17]

Gainax's predecessor, Daicon Film, was bought by the studio as a result of the self-produced animation DAICON3 Opening Anime, and Hiroyuki Yamaga and Hideaki Kanno came to Tokyo in the name of "Technical Training" and participated in the production of Macross at Artland. After that, Kazutaka Miyatake, Ichirō Itano, Toshihiro Hirano, Narumi Kakino and others participated in the DAICON4 Opening Animation, created as a collaboration similar to the original. The film, which is seen as a parody, featured a VF-1A Valkyrie with a Gundam beam saber and a "Super Macross", which had the Space Battleship Yamato and Captain Harlock's Arcadia attached to both of its arms.[18]

"Valkyrie", which is the iconic mechanical unit in this work, is an innovative idea wherein a fighter aircraft resembling a real aircraft (F-14 Tom Cat), transforms into a robot in an instant. In Aura Battler Dunbine, which started production four months after the Macross began, featured a mecha which could stransform. Even in Mobile Suit Gundam, would also follow suit when it produced Mobile Suit Zeta Gundam two years after Macross aired with its titular Mobile Suit could transform into a fighter form. These examples show how the "Valkyrie" can be said as a revolutionary design that has caused a "transformation boom" in the real robot genre. It is now considered one of the "pillars of real robot animation" alongside "Gundam". Additionally, some writers have argued that the Valkyrie combat helped inspire the live-action film Top Gun.[19]

Real-life artists debuted as part of a tie-up to fictional idols in animation such as Takako Ota in Magic Angel Creamy Mami, Kumi Miyasato in Megazone 23 and Eri Tamura in Idol Densetsu Eriko. The sequel to this series, Macross Frontier, selected a singer for its heroine Ranka Lee via a public audtion, as well as Macross Δ, which hired Minoru Suzuki to play Freyja Wion, all made their debut as artists outside of their respective series.

Finally, by having characters in the series use the nickname "Otaku", a term also used by some of the series' younger production staff, it became widely used among anime fans. There has been a theory that this contributed to the spread of the modern use of the word "otaku". However, Shōji Kawamori, who has once described himself as an "otaku", commented in the Animage, June 2001, that these were merely "words used by generations older than us."