Gameplay consists of two modes, a vertical shooting part and an action part.

In the shooting part, the VF-1S (Fighter Mode) has to navigate through waves of Regults with a Thuverl-Salan moving back and forth at the top of the screen. After some time, the ship will temporarily open up and start flashing, signaling that it can be infiltrated. If the player fails to enter within the allotted period, the shooting part will continue until it occurs once again.

Upon successful entry, the VF-1S shifts to Battroid Mode and the action part begins. The Thuverl-Salan's interior consists of two maze-like corridor screens with Glaugs patrolling the area. The objective is to reach the ship's core in the second screen and destroy it. After doing so, the BGM will be superimposed by an alarm signal and a 100-second countdown will start. The VF-1S must escape before the Thuverl-Salan explodes. The Glaugs in the first screen will respawn, making things difficult.

The game will then cycle back to the shooting part and go in the same looping sequence until all VF-1S units are lost. 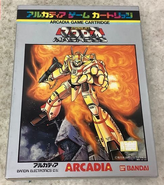 Title Screen. This sequence is also used upon successfully entering the Thuverl-Salan in the main game. 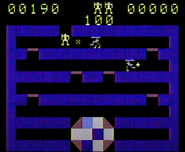